AN ALLEGORY OF ACQUAINTANCE

A man’s life of any worth is a continual allegory – and very few eyes can see the Mystery of his life – a life like the scriptures, figurative. Keats

A sneak preview of my latest work in progress, which I have titled An Allegory of Acquaintance. At the centre, as you will recognize, is my second portrait of my neighbour Captain Cox.

The painting is partly inspired by Titian’s Allegory of Prudence which hangs in the National Gallery – one of two paintings around which Alan Bennett masterfully constructed his play, A Question of Attribution, about Sir Anthony Blunt, Keeper of the Queen’s Pictures and Cambridge Spy.* Blunt was a role I played on stage and on radio. In the play he identifies Allegory of Prudence as a ‘puzzle picture’ and remarks: ‘Appearances deceive. Art is seldom quite what it seems.’

In place of Titian’s three beasts (a wolf, a lion and a dog) I have painted Ambassador Bean, who of course was the catalyst of my acquaintance with Captain Cox. The third human head will be the young Captain’s in profile. 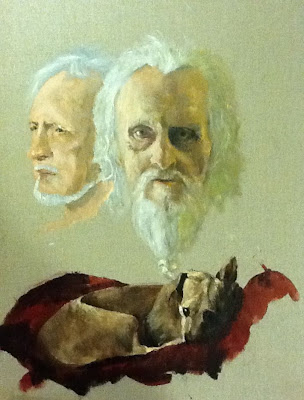 * Speaking of Cambridge Spies, another notable former resident of West Hampstead is Kim Philby on whom Bennett’s play The Old Country is based.

5 thoughts on “AN ALLEGORY OF ACQUAINTANCE”