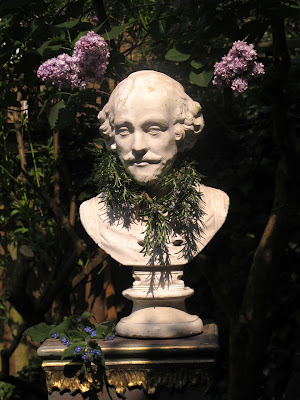 On this, the Bard’s birthday, I append an excerpt from the Shakespeare chapter of my book, Slim Chances:

We can’t revisit Whitehall to sit with King James at The Tempest, nor, despite Sam Wanamaker’s crusade, revisit the Globe. However, at one rainy matinée of Henry V in 1997, from high in Wanamaker’s reproduction of Shakespeare’s wooden O, I caught the essence. The rain ran directly off the thatch onto the necks of the groundlings who had ‘prime’ front-row positions with their elbows on the very stage, the gutter and drainpipe not having been invented in Shakespeare’s England. The purists have been defeated and gutters installed, and who knows if a Wimbledon-type rain roof may follow, but from my seat undercover in the second balcony round the side, the management of rainwear and even umbrellas was part of the show, and the age-old jokes by the French about the English weather can seldom have gone better since a wet afternoon in the Golden Age. There were cessations in the rain. It surprised me that there are no battle scenes at all; three comics take a Frenchman prisoner, as I remember, and yet one believed in Agincourt, merely on the strength of a beaten drum sounding from somewhere behind a door or curtain.

When Mark Rylance’s Henry prayed quietly and alone on the eve of battle, he walked to the very front of the platform and knelt with his head bowed and his fingertips placed at the top of his forehead. The lady in the trendy mustard-coloured rain cape, the couple who had been crouching under a broken umbrella so as not to block anyone’s view, in fact a small detachment of groundlings stirred themselves and, unobtrusively, stepped back from the centre of the platform to give due reverence and room to the King. Miraculously, I, leaning over the balcony, and slightly behind Mark, heard every word of ‘O God of battles! steel my soldiers’ hearts!’

The four-hundred-year-old play, history itself, the fabric of the theatre (some of it built of oaks that were saplings when Shakespeare was alive), the actors, the audience, all were held in one great theatrical NOW.

A very happy Easter to you all!

One thought on “THE IMMORTAL MEMORY”