We know that Anthony Hopkins reads through and speaks his film parts a hundred times before he gets to the studio. This element of intense preparatory study is the thing that connects the actor performing before the oil and gas footlights of the 18th and 19th centuries with the film actor today finding his mark and his key light. In the ‘old’ theatre, rehearsal was at a minimum, especially in the classics, where the staging was standardized. Leading actors made their special ‘points’, even sending a junior actor ahead on a tour to explain the business they were going to do and so avoiding rehearsals with a provincial company altogether. When a leading actor was preparing to burst onto the West End stage, the great bulk of his preparation was in his own study, not only learning his part thoroughly but also working out exactly what he would do with it.
It is not outlandish to turn up for filming on Day One of a project and find one has committed one’s key scene to the cameras by lunchtime or by 9.30 if it’s TV. In film acting, there is a heady sense of improvisation and discovery and living in the moment, but it had better be backed up by one’s own careful preparation.
I’m about to go to Budapest to confess Jeremy Irons’s Pope Alexander VI (in the Showtime series The Borgias). The last time I met him was last Christmas when he came to see his son Max playing the younger me in Stoppard’s Artist Descending a Staircase and we chatted afterwards, backstage by the fire escape at the Old Red Lion in Islington.
I was last in Budapest in 1992 where I had flown in to play the eponymous role in Maigret’s Boyhood Friend. Our Stanislavskian preparation, Mike Gambon and I, might have been done nearly thirty years earlier when we were inmates of the walk-ons dressing room at the Old Vic, home then of the National Theatre. I certainly remember schoolboy mischief leavening the boredom of our very slender acting duties.
I had just gone direct from Budapest Airport to a make-up caravan to discuss a moustache, and there was Maigret/Gambon on the street corner. We greeted each other briefly, like boyhood friends, and the next day were filming in the back of a police car, with me under suspicion for murder. 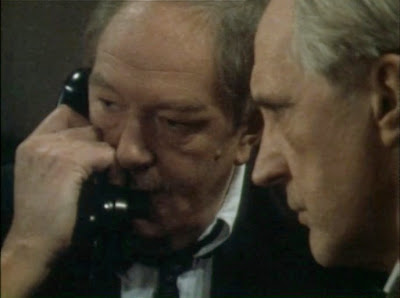 Eventually we caught up over a hotel supper. So much of our talk was about ‘the old days’, as if we were speaking of gaslit footlights. Though they were the days when we rehearsed The Royal Hunt of the Sun – Mike playing a Spaniard, I an Inca – for at least twelve weeks?
Mike and I parted early that night … we had our parts to study for the morning.
_______________
ALSO THIS WEEK
Coming shortly: a new webcam poem, an autumnal meditation and celebration.
Meanwhile, a recent picture of Bean, happily ignoring my self-portrait to charm and entreat the artist. 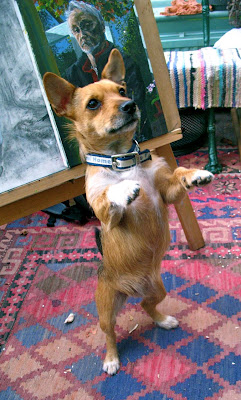 3 thoughts on “RETURN TO BUDAPEST”