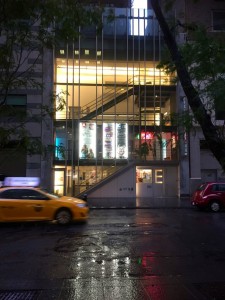 Mr. Petherbridge [assumes] the role of Lear with a truly affecting air of embattled vulnerability. At other moments, he is simply Mr. Petherbridge, a renowned performer with all of a first-rate actor’s vanity (we get to hear a lot about famous plays and famous people) and sensitivity. … Every performance is, in a sense, a fight against limitations. In “My Perfect Mind,” Mr. Petherbridge — who is just about to turn 79 and shows little evidence of the strokes that once felled him — does what actors have always done, turning handicaps into weapons to conquer an audience. NEW YORK TIMES

The players’ remarkable talent and mastery of craft make everything they do feel effortless, almost casual, immediate, spontaneous and personal. The fun they are having acting and play-acting, conjuring up different characters—such as Petherbridge’s parents, a New Zealand cab driver, Lawrence Olivier, Kenneth Branagh—is infectious. Even the bits that might seem a touch corny on paper—such as a pun about a level playing field in reference to the raked rostrum—the performers’ commitment and Ms. Hunter’s sharp, organic direction, turn into living moments one can take joy in unapologetically. STAGE AND CINEMA

My Perfect Mind has not a whiff of pathos and bears no resemblance to those turgid my-road-to-recovery stories that litter TV screens. In fact, the story it tells is not linear, but rather kaleidoscopic as it jumps forward and back in time and slips back and forth between fact and fantasy with ease and élan. And it is a wonder and a delight to behold. … An actor’s life, be he a stroke victim or no, is a perilous one and it so very easy to lose one’s footing. But when the actor is Edward Petherbridge — who tells us he’s seventy-eight and “I’ll be seventy-nine in August” — it simply does not apply. He is charm and grace personified. Like another great Shakespearean character, age cannot wither him, nor custom stale his infinite variety. NY THEATRE GUIDE

Witty, wild, wonderful and thoroughly entertaining … You realize when you first enter the theater that something unique is being staged. The set is tilted, a sign that My Perfect Mind has a real zany side. Yet this is a comedy with serious undertones. … Petherbridge and Hunter master their roles. My Perfect Mind is a fast moving play and the two men work seamlessly to create an interplay that is so realistic that it seems spontaneous. Petherbridge as Edward deftly clings to the classic role of Lear while Hunter dazzles with his brisk character transitions. You never know who he will be next or what he will do. Amusing moments abound such as when he repeatedly slides downward on his belly onstage or pads his clothes and becomes Edward’s pregnant mother. While there are moments of complete absurdity, My Perfect Mind is also a thoughtful, poignant story that you will remember long after Petherbridge and Hunter take their final bows. BROADWAY WORLD

Petherbridge’s extraordinary performance in this one-act two-hander is reason enough to flock to the theater, but the autobiographical nature of the story, together with a ridiculously funny performance by his costar, Paul Hunter, adds a fascinating dimension to this quite literally off-kilter story about Shakespeare, the craft of theater, and the regenerative power of the human mind. … Petherbridge adroitly brings that sort of improvisational quality to the show, with recitations of Lear delivered so naturally he seems to make them up on the fly. It’s one of the charms of this fragmented, hilarious, strangely lucid memory play about an actor performing a play about performing another play in his mind for a real (or imaginary) audience. With all its twists, turns, and contortions, My Perfect Mind is a delightfully entertaining brainteaser. THEATER MANIA

Their performance gives us a new appreciation of the capabilities of the mind, its resilience and fragility, its beauty and mystery. Petherbridge’s performance is an uplifting affirmation that life is an adventure and we must continue to be engaged and enthusiastic about all it throws at us, especially when adversity comes knocking and what we most fear threatens to come upon us. Truly, Petherbridge has topped his former career endeavors with his role in My Perfect Mind. BLOG CRITICS

Esteemed actors Edward Petherbridge and Paul Hunter blow the roof off the house with their whirlwind of talent and humor. … It is no wonder that [Petherbridge’s] credits are so prestigious, considering that he uses his mind, body, and voice with such clarity and ease that he clearly read these tools’ instruction manual cover to cover. THEATRE IS EASY

These scenes are performed with such eloquence that even if you’ve forsworn seeing yet another production of Shakespeare’s masterpiece, you will happily stand in line for tickets should Mr. Petherbridge take on the role in earnest. But for now, there is this joyous marvel of a work. The Inca lament for the dead sun god Atahualpa alone is worth the price of admission. TALKIN BROADWAY

My Perfect Mind gets its zing from its insouciant attitude to Petherbridge’s stroke; it gets its literary scope from frequent flights into Shakespeare’s play, the text itself an antidote to frailty. It’s that rare thing, a play about the terrors to come that somehow operates on a wholly delightful level. Like Lear’s own Fool, it makes us laugh at the storm. TIME OUT

Petherbridge, lean of limb and blessed with a speaking voice that ranges over countless octaves, has a supremely light touch, muttering his wisecracks as if apologizing for their caustic content, corralling the most oddball comment until it gets the laugh it deserves. Staring at the perilously slanted stage, he says, “We were promised a level playing field tonight.” Covering the upstage wall with sketches of Lear’s daughter, which he then douses with paint, he dismisses the whole business, saying, “It looks like a bad day at MoMA.” When the scene with Lear on the blasted heath arrives, he is perfectly capable of slipping into a bit of “Stormy Weather.” And, when one isn’t looking, he launches into Shakespeare’s verse with an authority and clarity that leaves one stunned. LIGHTING AND SOUND AMERICA

Petherbridge seems to have lost nothing of his acuity or charisma, only the chance to play Shakespeare’s most famous king.  That is a disappointment that My Perfect Mind seeks to remedy, offering Petherbridge snippets at least of that great role, principally Lear preparing to banish Cordelia and being reunited with her before his death. In these moments, even as unexpected and ephemeral as they are, Petherbridge glows as an actor of immense depth, intelligence and sensitivity. … My Perfect Mind is a perfect diamond in the rough, an opportunity to see one of Britain’s greatest living actors in a mesmerizing, funny, whip-smart and thoroughly human performance, a meditation on life and acting … To quote Robert Frost, “The afternoon knows what the morning never suspected.” My Perfect Mind is a tribute to the long, glowing afternoon of Edward Petherbridge. EXEUNT MAGAZINE

The theatrical “fourth wall” is expanded and collapsed as easily as a gentleman’s umbrella as the two seasoned performers meditate on the nature of theater itself. These quirky encounters are accompanied by generous helpings of the Bard, and Petherbridge fuels his Lear with a musicality and psychological spontaneity that illuminates the potency and evergreen relevance of Shakespeare’s poetry. ETHAN KANFER: NEW YORK THEATER REVIEWS