A PRESS OF ONE’S OWN

For books are not absolutely dead things, but do contain a potency of life in them to be as active as that soul was whose progeny they are; nay, they do preserve as in a vial the purest efficacy and extraction of that living intellect that bred them.

As promised a short film to mark the centenary of the Hogarth Press, which was founded in the Spring of 1917 by Virginia and Leonard Woolf, and to celebrate the fascinating history of just one of its publications.

The Villa Razzolini, featured briefly in the film, was bequeathed to Johns Hopkins University in 1971 and dedicated to the Dante scholar and Hopkins professor of Classics, Charles S. Singleton. In a published history of the villa, we’re told: ‘In that green band, almost at the centre of the fresco [by Vasari], we see the little church of San Leonardo … At the second turn in the road after the gate, just before the church, Vasari depicted a cluster of small domestic buildings.’ 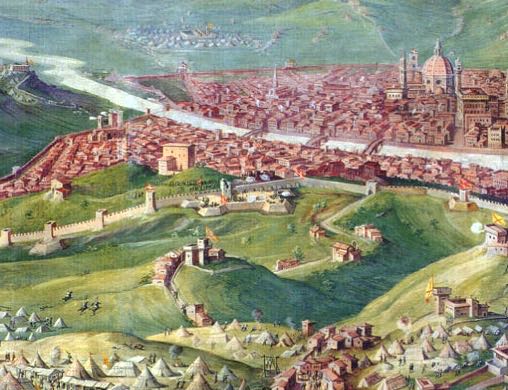 Detail of ‘The Siege of Florence’ by Giorgio Vasari, Palazzo Vecchio