ART IN THE RIGHT PLACE

Violent brushwork and strident colour are the manifestation of a desperate intensity of vision, are an act of surrender to the terrible vitality of things.

In March 1981, Emily and I were busy. We spent eleven days in a television studio, filming Trevor Nunn’s RSC stage production of Chekhov’s Three Sisters, and then continued playing the RSC eight-and-a half-hour Nicholas Nickleby on the stage of the Aldwych Theatre, whilst waiting to see whether a Broadway season would ensue.

At this time Ian McKellen and I began a transatlantic correspondence – he was playing Salieri in Amadeus on Broadway. We thought it might make an interesting picture of Anglo-American theatre. I came across the letters today and found a passage relating to the painter John Bratby whose works are to have an exhibition at the Jerwood Gallery in Hastings, opening in late January. 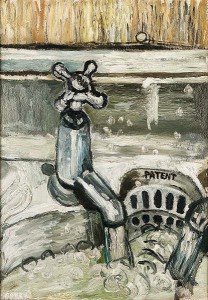 It was Bratby’s work as a young artist that inspired critic David Sylvester to coin the term ‘kitchen sink’ to characterize the new school of social realism. But this enfant terrible of the 1950s and prolific painter of the everyday had an abhorrence of egalitarianism. This is the relevant passage from my letter to Ian:

John Bratby RA ARCA RBA FIAL FRSA wrote to me (and Roger R) from the Cupola and Tower of the Winds, Hastings. I quote:

‘I am painting a collection of small portraits of individuals for posterity to see, when our society has completely changed from one based on the concept of the individual and freedom to one where the individual is non-existent, lost in the collective state, which is the eventuality if this government does not succeed.’

I may say I deplored the Thatcher government to which he referred, but note that, whether one believes it succeeded or failed, we still have a modicum of individuality in spite of the ever-widening gap between rich and poor, and the difficulty business has with the notion of paying a ‘living wage’, and the ease with which the government enforces its cuts in expenditure.

I now can recall that in the event I was given a white bread roll or bap mounted with a thin slice of cheddar cheese, sliced tomato and lettuce, followed by a cup of tea, all while sitting where I had posed for the morning. There followed several letters, each persuading me to buy the finished article (finished by teatime that same day) and offering me the inducement of my sending Bratby a series of postdated cheques to soften the financial blow. I knew that his claim, in his initial letter, about ‘art for art’s sake’ and there being ‘no commercial consideration’ was a touch hollow, but he had a living to make after all, as we all do.

That time with the RSC in the late 70s and early 80s was not commercial theatre (though there were adverts between the acts of the Three Sisters on Thames Television) but was well enough paid to help us to move from a flat in Kilburn to a house in West Hampstead. Little did I know that I would really start doing Art for Art’s sake later on at Statford when I rejoined the RSC in the 90s and resumed drawing and painting seriously, having virtually given them up when I left school. I had, however, done this drawing of Ian in the NT production of Armstrong’s Last Goodnight, backstage at Chichester in 1965. 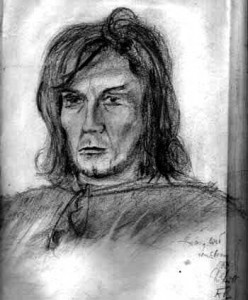 As I am fond of repeating, the fact that I am the cheapest model I know explains the number of self-portraits I have produced and there is, and has been, no commercial consideration.

I wanted to keep in the family the dual portrait of my brother when young and the 1940s Bradford Alhambra, and no-one was more surprised than I when it was accepted by the RA the summer before last, or as disappointed when my painting of an East Sussex dew pond on the Downs was merely shortlisted this last summer. It has crossed my mind to try to sell a few landscapes of Sussex now that I live here. Am I considering the commercial?