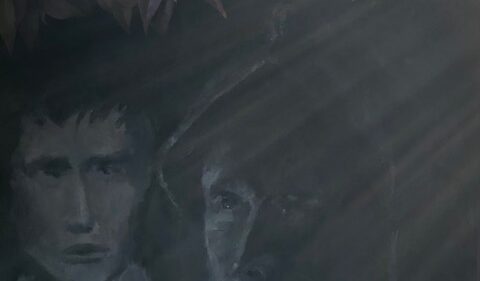 This September the annual Art Festival in Lewes, Art Wave, usually extending into artists homes, is confined to their gardens or separate studios.

Malcom, who recorded Hamlet, and I want to combine my visual art with the audio in my garden come September not by inflicting the three hours forty minutes of our audio version on our visitors, but a pithy, optional ‘immersive’ experience, embracing related pictures – Stoppard’s Rosencrant’s and Guildenstern,  for instance, the almost mythical figures  Perrot and Harlequin…..as well as the painting that celebrates my ‘Lear spin off’ My Perfect Mind (which my daughter describe as surreal.

A Brush Backstage would be an ideal title were it not that paintings and pastels of the immediate landscape surrounding where we live were not ‘part of the picture.’

Hamlet, the Ghost in a garden

Should I be begging your pardon?

Was first played in day light

With Will as the Ghost so don’t Harden…

…Your heart, for Artwave plein air

Is fine, if the weather is fair

And foot lights will hang in the shade

They lit the first parts that I played

I think it was Brecht

His famed ‘A’ effect

His the style then that must be obeyed 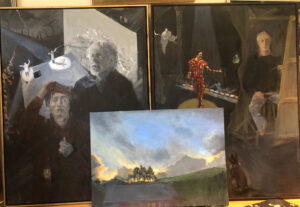 I have completed these three pictures within the last two weeks