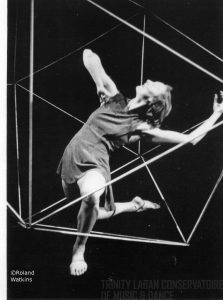 Philip [Prowse, director of The Duchess of Malfi, NT 1985], I discovered, had instinctive choreographic flair. Even in the rehearsal room, with four or five actors standing about as courtiers in their street clothes, he would offhandedly gesture to suggest a shift of position and the actors would create, as if by chance, a dynamic piece of meaningful movement and settle into a living Renaissance frieze with such a sense of period and purpose. In truth, this conjuring trick had a lot of dogged company dedication behind it. And our willowy, beleaguered movement consultant, Geraldine Stephenson, hovered discreetly, not to say diffidently, at the back of the rehearsal room, never quite knowing what Phillip wanted, yet authoritatively slipping in crash courses in attitude and various brands of bow that seemed to emerge as from sixteenth-century Italian paintings. Geraldine, incidentally, worked in that peculiar theatrical territory where dance (as Oscar Wilde said of truth) is rarely pure and never simple, especially when it comes to actors perfecting and memorizing steps; it’s a territory where drama is not expressed in dance but where characters in a dramatic situation happen to be dancing. She was usually asked to make dancing look natural and sometimes to make what is naturalistic edge its way into dance. (From Slim Chances)

Geraldine taught Julia Roberts to jive, I believe, whilst she was choreographer on the movie Notting Hill, though sadly the result did not make the screen. 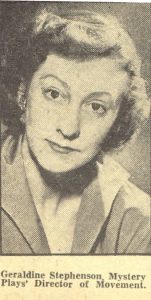 I was seventeen when ‘Gerry’ was a visiting teacher at the Northern Theatre School; she was a disciple of, and chief assistant to, Rudolf Laban at the time and her classes were both rigorous and freeing – no dancing, rather abstract in their exploration of, it seemed, every fundamental quality of movement. We students played demons, bad and good souls, at the last judgment under her direction at the York Mystery Plays of 1954.

In 1964, she provided a uniquely authentic Morris Dance – unique because I have never seen its like in front of a pub on a Saturday afternoon, but in the Mermaid Theatre’s production of The Shoemakers’ Holiday, the English folkloric tradition came admirably alive with vigour and élan.

In the mid 1980s, she filled a marble-floored grand hotel ballroom in the Aldwych with expert ballroom dancers and strove to bring Harriet Vane (Harriet Walter) and Lord Peter up to standard in a tea-dance quickstep. Perhaps luckily, the camera was more interested in our dialogue than our footwork. She coached Emily and me in the same dance at the Lyric Hammersmith in Busman’s Honeymoon. She must have had an encyclopaedic knowledge of dance from the pavane to the Charleston and far beyond in both directions, always coaxing actors to capture that ease with social dancing which makes it a celebratory modus vivendi.