To me a dancer’s life is an amalgam of three crucial elements. The impossible and the spiritual, all wrapped up with a ribbon of passion.

Gillian Lynne,  A Dancer in Wartime 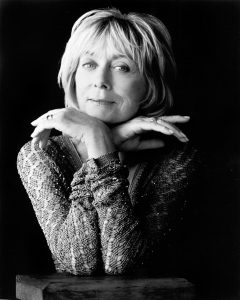 Gillian Lynne – Dame Gillian as she latterly became – rang me up out of the blue a year or two back. Her beloved husband had bought her my book, she told me, and she wanted to thank me for writing about her ‘beautifully’. I had written with admiration and affection. So it is with Gillian’s approval, so to speak, that I quote myself here by way of a eulogy.

Gillian Lynne. No sooner had I typed the name of the illustrious choreographer of Cats than I broke off to do my exercises. Gillian is the queen of the warm-up session and I was doing homage to her. She was the first person to cast me in a musical, namely Valentine’s Day, an adaptation of George Bernard Shaw’s 1897 comedy You Never Can Tell. That was in 1991, when Cats was about halfway through its twenty-one-year run and I was a mere boy of fifty-five with a shock of long white hair that had not recovered from being turned blonde four years earlier for my portrayal of Lord Peter Wimsey. But I was turned young again by Gillian’s rehearsals, or rather her morning warm-ups, even though I was playing William, the elderly waiter, who, without sacrificing any credibility – his or mine – was to become in this musical version a song-and-dance man. Gillian, ten years my senior (and still blonde), started each day on the floor in front of us, encouraging the whole cast – young dancers and ageing actors alike – to put our legs into the same interesting places in which she effortlessly put her own.

Looking back, the job had idyllic aspects to it. I lived in a charming West Sussex village with a beautiful name, East Ashling (then still unspoilt by commuter-belt ‘improvements’, plastic window frames and garage extensions), in a cottage with a free-range pig farm over the back-garden fence and a little bluebell wood opposite the front door. One morning, before Emily and the children came down to stay with me for the summer holidays, I woke up wondering who I was in bed with. Then I realized. It was me! I wished I’d been doing Gillian’s exercises all my life: who knows what heights of flexibility I might have achieved on stage – and what extra fun I might have had off! …

I shall never forget the discipline and the rigour that went into my particular light-fantastic numbers in Gillian’s witty choreography. No director, unless he was a Victorian, would ever demonstrate the optimum way of doing a personal thing like a move or a gesture, but dance is a precise science. I once witnessed a rehearsal of a Soviet dance company after which an old, slightly overweight choreographer, in a Soviet suit and street shoes, clumped on-stage and approached the magnificent young creature who had just danced Le Corsaire, and, in a kind of lucid dance shorthand, demonstrated the optimum way of doing a sequence as the youngster watched attentively. Similarly, time and again, Gillian would unlock for me the quintessence of a step or the aspirational direction of a look, the turn of the shoulders or head.

Valentine’s Day had a small kitten’s life at Chichester and in the West End compared to the nine plus lives of Cats, which was translated into more than twenty languages. Gillian went around the world giving her personal blessing to each Cats production, whilst occasionally complaining of feeling creaky, but there is video footage to prove that, well past her seventieth year, there was nothing shorthand in her demonstrations. There is also a fuzzy video on a shelf in my house to prove that what always felt to me like myself at full stretch (because it was) does, in fact, appear light and fantastic. I thank my lucky stars, and Gillian, for the experience of that stretch and for the delicious release into song of Denis King’s music with the thrill of trying to remain quietly professional at my very first band call. I needn’t have troubled; these hard-bitten young veterans of musical theatre laugh and cry and applaud at the results! The band call is the apotheosis of belief.

From Slim Chances and Unscheduled Appearances (2011)