I was sad to hear on the news that the director Howard Davies has died; he was only 71. I worked with him on David Mercer’s No Limits to Love back in the days of the RSC’s Warehouse Theatre (now the Donmar), which Howard had established. But what I’m chiefly remembering this evening is his 2010 production of The White Guard with Bunny Christie’s designs and Andrew Upton’s new adaptation of Mikhail Bulgakov’s own dramatization of his novel which the Moscow Art Theatre staged in 1926. I can’t imagine that even Stanislavski’s production was more steeped in atmosphere, more ripe in comedy as well as heart-wrenching drama and yet consistently believable as it moved in its realism through the pathos and pity, savagery and absurdity of civil war. At the time I wrote (just days after seeing the penultimate evening performance):

It was the nearest thing to being in Kiev in 1918. Where do all these excellent actors come from? In my ignorance I knew only one of them. Howard Davies’s production I found quite flawless, masterly. One is amazed to think that Stalin saw the Moscow Art Theatre performance twenty times – but perhaps not so amazing if their production was as good as the NT’s and, of course, it must have been. Odd how one catches oneself out assuming that the theatre must be better now than it was way back.

Here is the original programme or cast list for the Warehouse production of No Limits to Love. It was Mercer’s last play and was staged posthumously. Ned Chaillet of The Times described its style as ‘Hampstead realism’ and said it struck him ‘as Mercer’s best play in years, served extremely well by Howard Davies’s direction and four perfectly meshed performances. Its strength lies in its ambivalence about its characters and its benign acceptance of the intricacies of imperfect love.’ 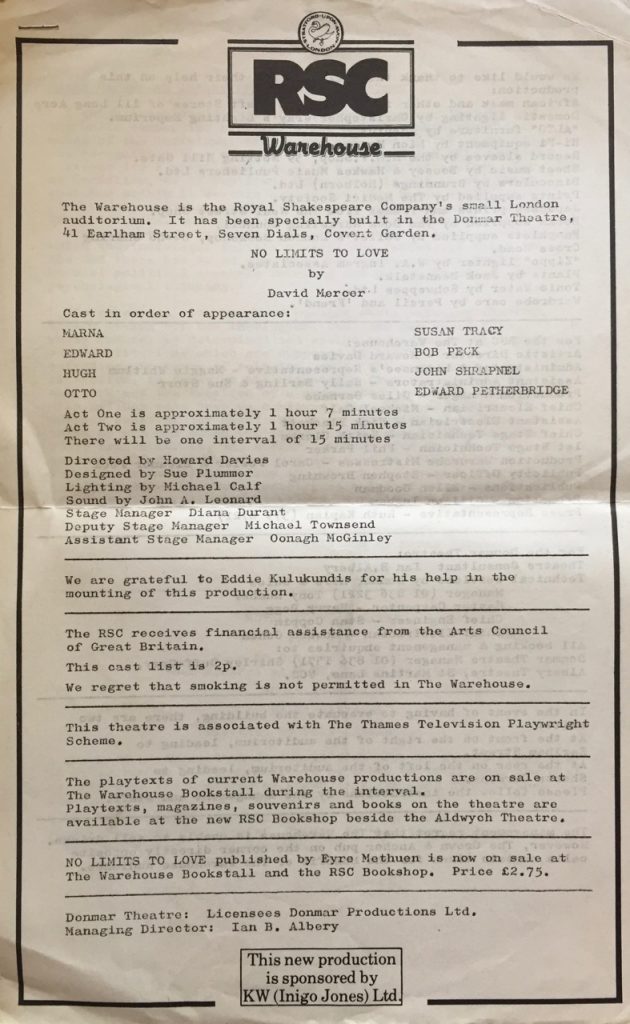 We have a new film blog in the works (which touches, in part, on pre-revolutionary Russia) so do check back in the next day or so.