The latest version of my still life: 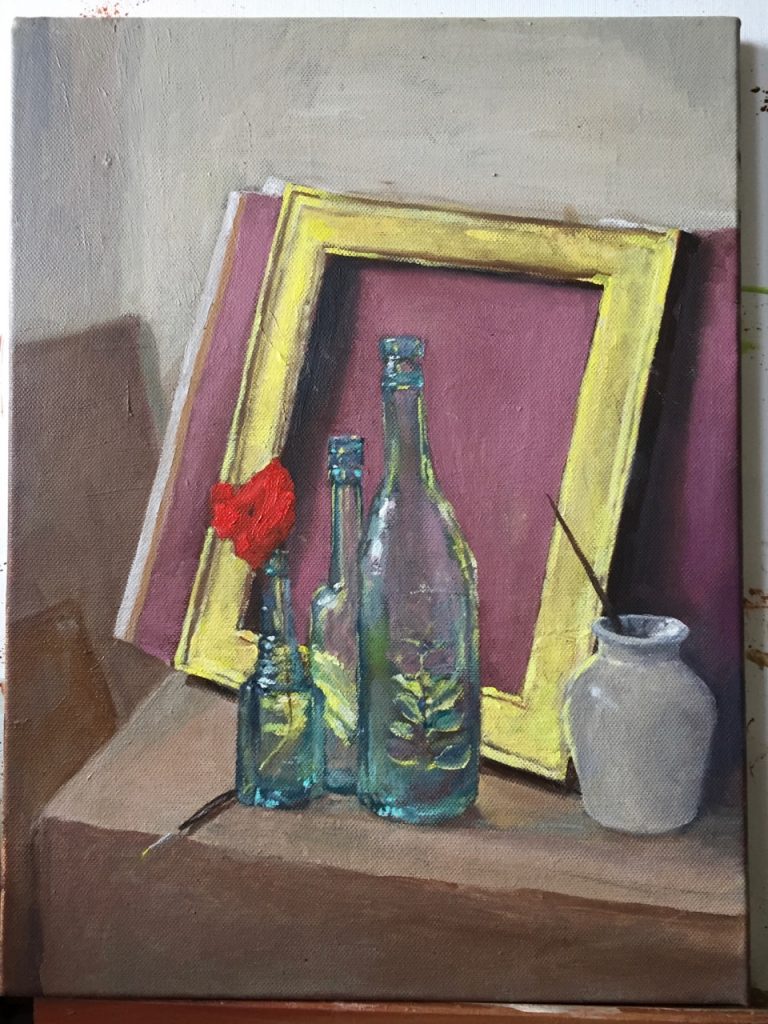 And an excerpt from Virginia Woolf’s marvellous short essay, ‘The Death of the Moth’, in which she describes the beauty, power and wonder of life and the mystery of death. It is given added poignancy by the fact that it was written late in her life and published posthumously.

The same energy which inspired the rooks, the ploughmen, the horses, and even, it seemed, the lean bare-backed downs, sent the moth fluttering from side to side of his square of the window-pane. One could not help watching him. One was, indeed, conscious of a queer feeling of pity for him. The possibilities of pleasure seemed that morning so enormous and so various that to have only a moth’s part in life, and a day moth’s at that, appeared a hard fate, and his zest in enjoying his meagre opportunities to the full, pathetic. … Watching him, it seemed as if a fibre, very thin but pure, of the enormous energy of the world had been thrust into his frail and diminutive body. As often as he crossed the pane, I could fancy that a thread of vital light became visible. He was little or nothing but life.

Yet, because he was so small, and so simple a form of the energy that was rolling in at the open window and driving its way through so many narrow and intricate corridors in my own brain and in those of other human beings, there was something marvellous as well as pathetic about him. It was as if someone had taken a tiny bead of pure life and decking it as lightly as possible with down and feathers, had set it dancing and zig-zagging to show us the true nature of life. Thus displayed one could not get over the strangeness of it. One is apt to forget all about life, seeing it humped and bossed and garnished and cumbered so that it has to move with the greatest circumspection and dignity.

4 thoughts on “LIFE STILL AND VITAL”