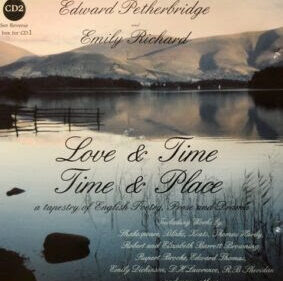 LOVE & TIME TIME & PLACE
As a Spring event, having missed Valentine’s Day, Emily and I offer a compilation of poetry, prose and drama; three minutes short of an hour in the company of some great writers. It can now be found in the “Shop”.
For technical reasons, it has to be in three parts. They are offered together for Three Pounds.
Emily Richard and I made it 21 years ago as a CD. Listening to it again, one was struck, of course, first of all by our younger voices, but very soon much more affected by the emotions, the ideas, the varied mental pictures conjured up by the word music of our English language in the hands of such gifted word smiths.
I suppose too we felt a special privilege, being, for almost an hour, snuggled intimately close to so many wonderful minds. It all made me wonder why one doesn’t spend more time in such enchanting company. (I have to admit to the cheek of sneaking one very short piece of my own in between Emily Dickinson and  Robert Browning at his most magnificent.)
In its days as a CD it carried this view, photographed on a memorable walk we took one afternoon in the Lake District.

THE LANDSCAPE AND PEOPLE OF CHARLES DICKENS
These recordings were made independently by our enterprise, but they have poignant connections with the RSC for Emily and me; Viola and Orsino in Twelvth Night as produced by the RSC in1977 were the parts we first acted in together: the  culmination of that particular time was the eight and a half hour Nicholas Nickleby which opened at the Aldwych in London ’78 and took us to Broadway where we did a special season of four months 81-82 . It is with memories of that span of work – including the TV and DVD version of NN we were reminded and moved by some moments ago. Even the passages from the other novels came home to us though we had never acted in them- Dickens we found goes straight to one’s heart in some very personal way and one feels privileged, even to have read his words in performance, after all he read them in public too.
Click here to cancel reply.