A largess universal, like the sun,
His liberal eye doth give to every one,
Thawing cold fear, that mean and gentle all
Behold, as may unworthiness define,
A little touch of Harry in the night.

Today, the Feast of Saints Crispin and Crispinian, marks the 600th anniversary of the Battle of Agincourt, immortalized of course by Shakespeare. I reprise here a memory of a particular moment in the new Globe Theatre’s inaugural production of Henry V.

There was nothing ‘twee’ about the Globe when I saw Richard Olivier’s production of Henry V in 1997. The company may have been seeking modern resonances in visiting and even rehearsing on the RAF airfields from which ‘The Few’ flew in the Battle of Britain, but on the rainy matinee I saw, a more immediate, if historic, effect was the rain running directly off the thatch onto the necks of the groundlings who had ‘prime’ front-row positions with their elbows on the very stage, the gutter and drainpipe not having been invented in Shakespeare’s England.

The purists have been defeated and gutters installed, and who knows if a Wimbledon-type rain roof may follow, but from my seat undercover in the second balcony round the side, the management of rainwear and even umbrellas was part of the show, and the age-old jokes by the French about the English weather can seldom have gone better since a wet afternoon in the Golden Age. There were cessations in the rain. It surprised me that there are no battle scenes at all; three comics take a Frenchman prisoner, as I remember, and yet one believed in Agincourt, merely on the strength of a beaten drum sounding from somewhere behind a door or curtain.

When Mark Rylance prayed quietly and alone on the eve of battle he had walked to the very front of the platform and knelt with his head bowed and his fingertips placed at the top of his forehead. The lady in the trendy mustard-coloured rain cape, the couple who had been crouching under a broken umbrella so as not to block anyone’s view, in fact a small detachment of groundlings stirred themselves and, unobtrusively, stepped back from the centre of the platform to give due reverence and room to the King. Miraculously, I, leaning over the balcony, and slightly behind Mark, heard every word of ‘O God of battles! steel my soldiers’ hearts!’ 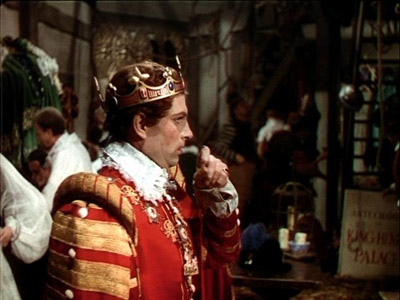 My first encounter with the play had been at the Birch Lane Cinema in West Bowling, Bradford when, as a boy of eight or nine, I saw Laurence Olivier’s Henry V. At a much later, ‘grown-up’ viewing of the film, it was another moment of quiet solitude that impressed me – but that of an actor, not a king. In the opening, the camera moves to show us round the crowded activity backstage in the Globe Theatre’s tiring house and suddenly comes upon Olivier, attired as the King, standing still and quiet, waiting by the door which leads on to the stage. He’s about to make his first entrance. Very, very gently he clears his throat. I hardly dare risk re-examining that moment. Film performances stay the same: we change. Perfectly, I thought, Olivier caught the moment just before an actor starts to act, before he steps from a private into a public reality. Typically imaginative and cunning of him to let us into that lone intimacy, make it his star entrance into the film, and then take us with him in his pocket on to the stage of the Globe.

A short film is to follow, featuring a much earlier king but one, in a way, closer to home.

One thought on “ST CRISPIN’S DAY”