In the early 1990s, I played Sherlock Holmes in a series commissioned in the US by National Public Radio and produced in the UK by Independent Radio Drama Productions. In one story, ‘The Greek Interpreter’, I also played Holmes’s elder brother Mycroft. The episodes were available as inflight entertainment on Concorde. So I can boast that I’m not only a mile-high Sherlock, but supersonic to boot. And, as it happens, interactive; the series has had an afterlife in the iPhone era as an animated app.

Yesterday I stumbled upon this photo of my Sherlock and remembered the hasty preparations for the photoshoot and my determination at the last minute to make a nose out of some of the children’s plasticine, aided with liberal pancake make-up. My overlong white hair was disguised with dye and the deerstalker and coat were supplied by the director Richard Shannon. 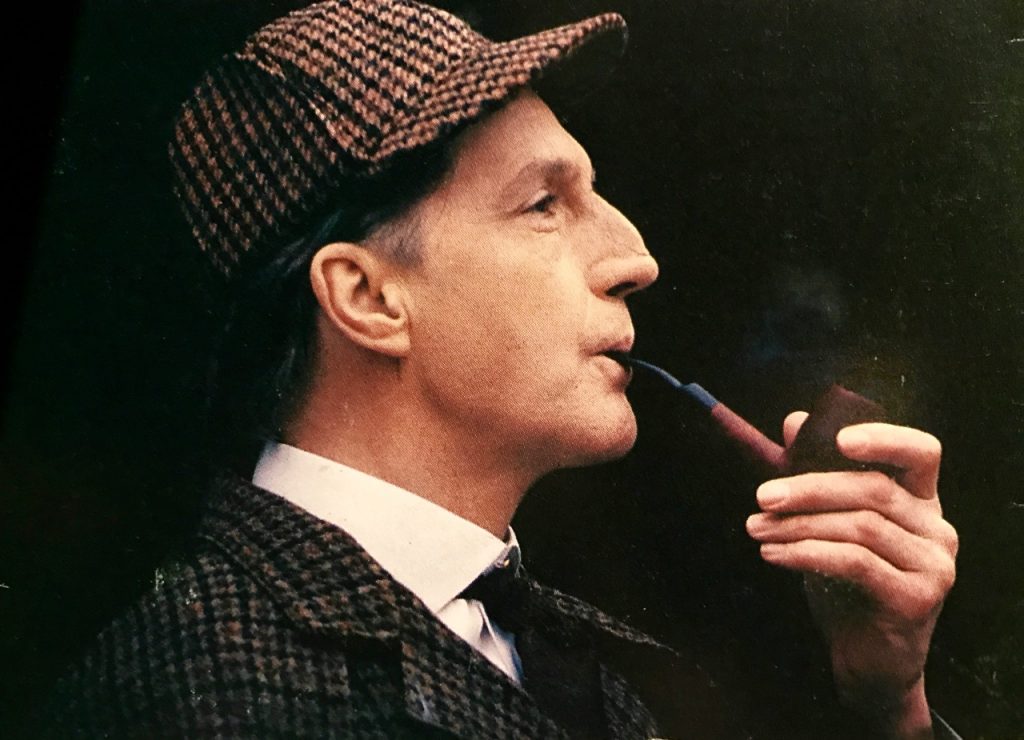 As mentioned last week, the audiobook of Charles Veley’s The Wilhelm Conspiracy is now available.

About the book
A prominent banker is found dead in an unsavoury part of London. Hours later, the charred remains of another body lie on a beach in Dover. Both deaths – and their possible link – attract Sherlock Holmes. Then the Secretary of War summons the detective with catastrophic news whose consequences could harm the nation for generations: on the eve of war, a new British superweapon has fallen into the wrong hands. Holmes must recover it.

Lucy James, an actress and Holmes’s recently discovered grown daughter, has inherited the family sleuthing skills. Despite her father’s objections, she insists on helping him find the weapon and solve the murders. Along with Dr. Watson, they follow the trail to Germany, uncovering a sinister plot that puts them directly in the line of fire. Featuring appearances from real-life notables Nikola Tesla, King Edward VII, and Kaiser Wilhelm II, this electrifying new mystery puts the greatest deductive mind of his era into a race to save the Empire.

Peth’s Staging Post has a limited number of promotional codes that will enable listeners in the UK to download the audiobook at no charge. Please go to the website’s Contact page, type TWC OFFER in the subject line, and in the message box type your answer to the following question:

Q. In what country was scientist Nikola Tesla born?

The complimentary codes will be distributed on a first-come-first-served basis. If successful, you will receive a promotional code and instructions on how to apply it. You do not need to be an existing customer of Audible.co.uk as you can create a new account when you are ready to activate your promotional code. The offer is open to UK residents only.