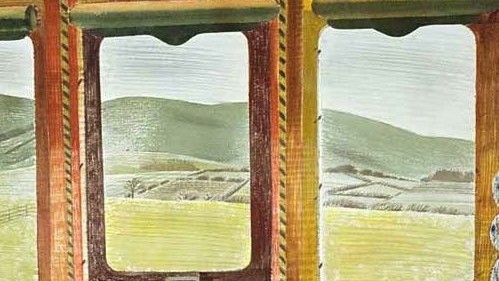 I remember carriage interiors very like this, with the leather strap to adjust the window to keep out smoke. I travelled widely as a touring actor before the infamous Dr Beeching axed hundreds of miles of branch lines in the early 1960s.

I advise slow trains on branch lines, half-empty trains that go through meadows in the evening and stop at each once oil-lit halt. Time and war slip away and you are lost in the heart of England. (John Betjeman, March 1940)

I wrote the following piece on a train home from Liverpool after a week of playing My Perfect Mind at the Unity Theatre.

(Click the play button to hear the audio version)

Leaden skies. It is 20 minutes past noon. The train is speeding from Liverpool to London through England’s grey and pleasant land and if I glance out selectively I might see a scene that would not be out of place amongst the British paintings 1890-1950 I saw at the Walker Gallery just across the cobbles from Lime Street station. A flash and this morning’s landscapes spin away – a distant impossibly tall and slender church spire at the centre of a tiny unnameable village, a copse of bare-branched trees with crow’s nests – gone – but surely I have gazed at those trees in tranquility; weren’t they gilt-framed in a quiet gallery somewhere … Someone, I suppose, is looking at them now, is caught in the spell of their living stillness. Signalling problems: we are stuck between suburban back gardens on one side and an anonymous tangle of branches on the other – snags for stray plastic bags – ah, we are moving on, and have passed the sudden pathos of two ponies grazing in a hollow close to the line. Now Kings Langley with a single wind turbine and its marginally better class of suburban back garden; no sign of the 13th-century royal palace but there is a bit of the old Ovaltine egg farm, I presume a quaint half-timbered model hen house in an empty square field. How many cups of Ovaltine did I drink before bedtime as a boy? Made here.

More recently I have undertaken a couple of long train journeys, which included a trip to Edinburgh to see Brian Cox and Bill Paterson in Waiting for Godot, a production in celebration of the Lyceum’s 50th anniversary (and the 60th anniversary of the first British staging).

Living in the country, as I now do, the journey from Lewes to Victoria Station has become very familiar. I spent much of last week working up in London, with a side excursion to Northampton to see Paul Hunter’s Inspector Rough in the 1930s ‘Victorian thriller’ Gaslight.

Here’s an attempt to harness the limerick to rail travel.

One thought on “TIME AND TRAIN”