Tomorrow we will run faster, stretch out our arms farther … And one fine morning — So we beat on, boats against the current, borne back ceaselessly into the past. F. Scott Fitzgerald

Tiresias, reputed to have been 300 years old, is the latest, and I hope the most advanced, in my studies of old age. The very first was my award-winning performance of a poet in a retirement home, which I played at the age of seventeen with the aid of white greasepaint and powder in my hair. The Bradford Association of Youth Clubs shield for Best Performance of 1954 is small but impressively classical, with the winged figure of Nike holding what I can claim as my second laurel wreath; I had won the previous year too. 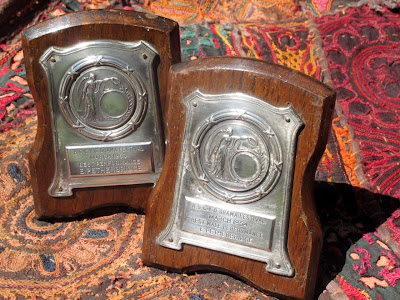 But before you laugh, the adjudicator in 1954 was an august sixty-one and knew about acting and creeping old age first hand, having played Viola in Twelfth Night at the Old Vic in 1927, graduating to Gertrude to the young Olivier’s Hamlet ten years later. Esmé Church as the principal of my drama school most certainly must have recommended me on the strength of my performance of the old poet to play the aged butler Frith in Rebecca – my first professional performance – in the Halifax Rep, when the company needed some cheap acting students to make up the numbers.

One thought on “ANCIENT YET MODERN”