AND ONE MAN IN HIS TIME

My blogs, including my first Bard Blog, have been variously criticized for not being blogs at all, far too long (never far too short), and even, for resembling every other blog. So I thought if I featured a short piece of footage of me speaking Shakespeare in my one-man show of 1999, at least it might not be too long and, whatever else it looked like, it wouldn’t look like any other blog. I suppose it might risk looking like any other one-man show.
For good measure the show was called Mr Dickens/Mr Shakespeare (more of Dickens’s Doctor Marigold in a fortnight’s time, a performance predating Simon Callow’s by the way). I had a Volvo hatchback at the time, packed my busts of Dickens and Shakespeare and various small props into Doctor Marigold’s trunk, somehow found room for a crewel work screen and a folding chair, and drove alone from London to Edinburgh to launch the show on the Fringe. There is a blog connection, in that my little show was essentially personal, solitary almost, the result of a cottage industry, the speeches selected and learnt under a tree in the garden, rehearsed in the sitting room, the poster designed and sketched on the kitchen table, its sky background a patch of sky photographed one day in London NW6. 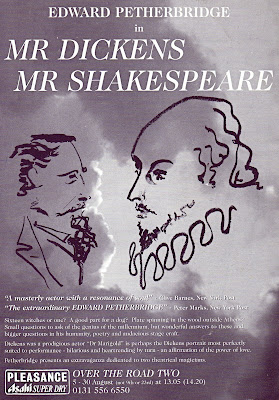 Before you look at part of the result, I am going to risk quoting Kenneth Tynan on a full-scale performance of one of Shakespeare’s plays; it says something about the manifold mysteries of speaking the Bard:

The jewel of the evening is Peggy Ashcroft’s Portia, a creature of exquisite breeding and uncommon sense. She speaks the poetry with the air of a woman who would never commit the social gaffe of reciting in public, with the result that the lines flow out newly minted, as unstrained as the quality of mercy itself. (Evening Standard, 20 March 1953)

Kathleen, my editor, discovered this extraordinary clip from 1955: Leonard Bernstein demonstrating how the 12-bar blues employs iambic pentameter. He begins with a rhyming couplet from Billie Holiday’s ‘Fine and Mellow’ and ends with the ‘Macbeth Blues’.

I finished my show with a song (though not a blues rendition) – Feste’s bittersweet, slightly melancholy final song.

2 thoughts on “AND ONE MAN IN HIS TIME”