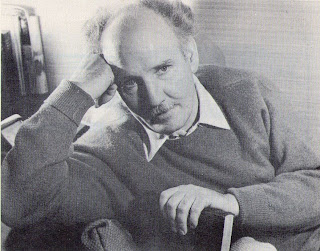 Bill Naughton (1910-1992)
Photo by Ida Kar
12 June marked the centenary of the birth of playwright Bill Naughton. It was he that in 1963 provided me with my first West End part, the younger brother in All in Good Time, which transferred from Bernard Miles’s Mermaid Theatre to the Phoenix. I had to convince as a young working-class lad from Barnsley. It was a cinch; I didn’t have to think about it, the years of Southern upper-crust nurture fell away and I was the pre-Theatre School boy again. Bill Naughton was fifty-three at the time, and was Bolton through and through (he had been a weaver, coalbagger and lorry driver), although his best-known work celebrated a London wide boy and sexual adventurer called Alfie.
During the run of All in Good Time I was offered the lead role in a radio play Bill had written, November Day, the original recording of which I only recently rediscovered. As a way, then, of commemorating a significant anniversary, let me share with you an excerpt from this rare recording, the moving final scene between my character, Joe Brady, and his wife played by Lois Dane. First, to set the scene, I offer a short extract (another sneak preview) from my forthcoming book:

Ironic really that, after all my endeavours in the provinces at ‘keeping it West End’, and the part that BBC Radio had played in ‘grooming’ my voice, my first West End play and my first radio play should be in the North Country working-class vernacular. Some actors are not able to lose their native accent, feeling that to do so would be to betray their roots and put on artificial airs. I was one of the many working-class actors of the 1950s who had no such qualms. In any case, as a boy, as I never tire of acknowledging, the radio was my ear’s window on the world; what a wide and infinitely coloured world it was and I wanted to be as multicoloured as I could. So I am not sentimentally attached to my native utterance; pragmatically, one searches for the appropriate voice wherever it might come from, but I found that I was especially moved listening again recently to Naughton’s November Day, a day in the life of a young married man in the Depression who lands a day’s work as a coalbagger.

There is a purity about the script; it has something so honest and authentic, reminding me a little of the plays of D. H. Lawrence in its lack of political posturing and cultural self-consciousness. The spare language is a kind of poetry; one line in particular I remember and love: ‘If I had a Clydesdale mare like that o’ thine …’. The hero is so busy keeping up with his arduous work and absorbing the rich talk of his newfound workmates and bosses, he speaks little in the central part of the single November day, but all the time one has the sense of him striving and learning, leading to the transformation which happens between the intimacy of waking up to the alarm clock and wrenching himself out of the warm bed, away from his wife and bairn, for the routine of failing to get work and coming back home to breakfast, the shock of being taken on and having grit himself to survive the challenge.

But beyond authenticity, and far beyond sentiment, I found a kinship with the voice of the young character I played. It was as if he were someone I might have been. A hero, yes, perhaps an idealized one, finding, after his exhausting day’s work, a moment of fulfilment, even redemption, with his wife and child as he sits naked before the kitchen fire with the baby on his knee. I knew that kitchen and that man, his life with his wife and baby, and felt proud to know them.

The extreme naturalism of Mr Douglas Cleverdon’s production, a pattern of recognizable natural sounds, tends to reinforce the impression that Mr Naughton is only cutting and offering a thick slice of life. Mr Edward Petherbridge’s Joe Brady, Miss Lois Dane as his wife … and others maintain the same easy, natural atmosphere. But Mr Naughton’s apparent artlessness, the exactitude of the external life which he and Mr Cleverdon present, needs neither to make claims nor to point morals. The people among whom Joe undergoes his ordeal are vigorously and cantankerously alive; the ordeal brings the hero to his maturity. To consider the surface of this is to apprehend the depths it covers.
(‘A Chronicle and Something More’, The Times, 22 July 1963) 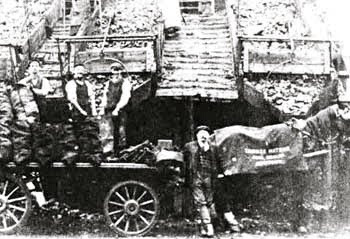 Coalbaggers pictured in the Lancashire Evening Post
And yet there was the odd occasion when I might get a sentence to match up almost perfectly with what I felt, and this simple act gave me a glow of satisfaction, even a touch of self-esteem. At times I’d be so overcome by the reconciliation I might achieve between imagination and writing, that I would feel a need to sneak out to the front door, sit on the doorstep, breathe in the sweet, cool air, gaze up at the night sky, and try to think of eternity, the soul, beauty, and images remote from lorries, spades and coal. It was as though something was urging me on in what appeared even to me to be a vain and hopeless quest.
(Bill Naughton, On the Pig’s Back: An Autobiographical Excursion, 1987)
Click here to cancel reply.