Without assuming that the world, or a tiny fraction of it, awaits my weekly blog, I feel I ought to post something, come what come may, by each weekend. I have done two days of research and development on the King Lear project, and start rehearsals for the musical of Oscar Wilde’s The Importance of Being Earnest on Monday: perhaps I scribbled whilst Rome burned, attempting a drawing class the other morning … I say if a job’s worth doing it’s worth doing not very well, as long as it’s the best you can manage at the time. 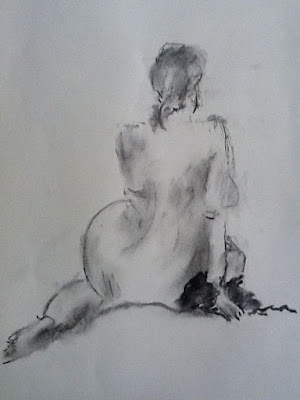 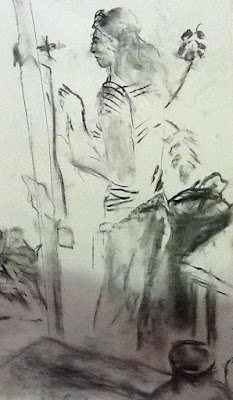 The art school is the former home of a forgotten but once famous late Victorian and Edwardian playwright, Henry Arthur Jones. Kathleen tells me that Oscar Wilde quipped: ‘There are three rules for writing plays. The first rule is not to write like Henry Arthur Jones; the second and third rules are the same’.

Saw Arthur Miller’s Broken Glass on Friday night, done superbly well. It was for me a somewhat late conversion to the extraordinary talent of Antony Sher.

The children used to like a supper called bits and pieces; my diet has included this last few days bits and pieces too numerous to mention and piecemeal work on my painting. Here’s a hasty snap of work in progress showing a stab at the young Oliver Cox. One of Kathleen’s last achievements before flying back to Sydney on Saturday night has been to Latinize my motto for the ‘Allegory of Acquaintance’: canis meus erat qui me in hunc antiquum militem induxit, triginta annos hospitem exoticum (‘It took my dog to introduce me to this old soldier, thirty years an exotic stranger’). 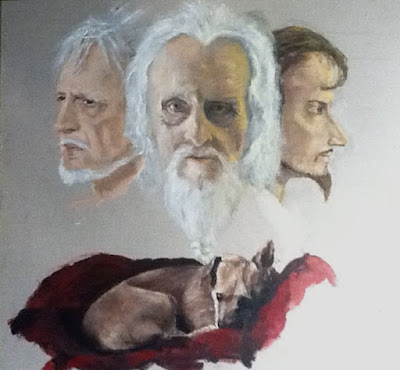 And talking of bits and pieces, I end with an attempt in sonnet form to justify my temerity in approaching Lear:

How can one have the courage to approach
The magnitude of Lear’s history
And yet the actor’s pride’s beyond reproach
For all the play’s great depths and mystery
Its raw, severe and storm-lashed language springs
Alive on to the paper to be spoke
Its tender limpidness so gently wings
While limps and swerves the Fool’s dry bitter joke
All tailored to the actor on the stage
To strut his flawed path, recognized and shared
By followers in youth and seasoned age
The audience, all captive and ensnared
All bound by mere pretence and play, to see
That pity for a while can set us free.

One thought on “BITS AND PIECES”