And they buried him in the citie of David among the kings, because he had done good in Israel, both towards God, and towards his house.

2 Chronicles, 24:16 (1611 King James Bible)
Some mornings this last week have been grey and the poor shred of a no longer protected ancient orchard, hemmed in by the local railway line and overrun with Japanese knotweed, was hardly visible and more disregarded than ever.
The train journey to Barnes for Importance rehearsals is convenient in theory but often very long in practice. Never mind! Since A. L. Kennedy mentioned and quoted from my book, Slim Chances, on her Twitter page on 27 October, I have sought out and been reading on my Kindle her latest novel The Blue Book and thus enriching my daily commute no end. In fact I have often been annoyed at the disruption caused by my arrival at Barnes station.
It is one of those almost folly-like stations, Victorian cottage Gothic with impressive chimneys.
The strange, delicately intense – hopeless adjectives –‘fierce’ would do as well and still convey nothing of the world of The Blue Book … anyway it is a world that has been separated from Wilde’s Act 2 and the charms of Cecily’s garden by a ten-minute walk through Barnes Common, which is pleasant enough in the mists but positively uplifting when the summer decides it is not yet over. 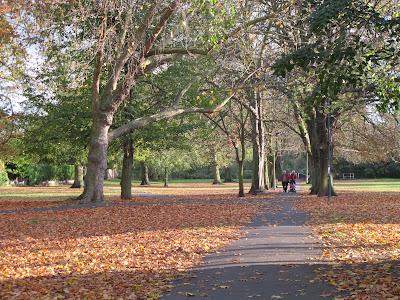 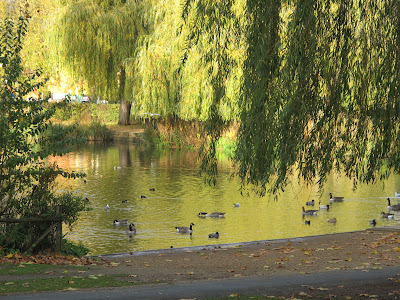 Failing sunshine, there is nothing like a good couple of hours of a full-cast singing rehearsal to lift the heart.
Actually I thought it might not be too late to lift the spirits and take up Tai Chi this morning when I was observing a local exponent on the edge of our green. Tai Chi is related to the martial arts, but a world away from the martial deportment I had been watching in the Remembrance Day ceremony minutes before, televised from Whitehall.
The remnants of the foundations of a WWII air raid shelter were dug up on the green recently; hardly anyone knew what they were. I happened to notice a Jewish boy happily kicking a football nearby.
On Saturday night in Trafalgar Square, when I emerged from a late-night viewing of the Leonardo da Vinci exhibition, there was another exhibition of grace on the wide pavement in front of the National Gallery Portico.
Kathleen reminded me today that the Tomb of the Unknown Warrior is the only tombstone in Westminster Abbey’s floor that one cannot walk over.
I remembered a moment from The Blue Book which I will dare to quote here:

One thought on “BLUE NOTES”