A BRUSH WITH WARHOL

Ships that pass in the night, and speak each other in passing,
Only a signal shown, and a distant voice in the darkness.
So on the ocean of life we pass and speak one another.
Only a look and a voice; then darkness again and a silence.

Charles Dickens was a hit when he toured America; so was the RSC’s eight-hour-and-forty-minute The Life and Adventures of Nicholas Nickleby in the autumn of 1981. I remember the Manhattan sunshine and that curious energy that seems to rise up from the sidewalks and put a lilt in one’s step. My wife Emily and I were walking to the Plymouth Theatre on 44th Street, where Nickleby was playing, and a voice, the driver of a yellow taxicab, called out: ‘You guys are great!’ Shortly after we opened on Broadway, this cartoon appeared in The New Yorker: 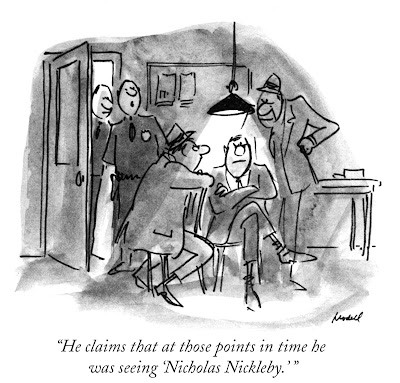 The production had always involved us actors in an unusual amount of interplay with the audience. We were encouraged, nay obliged, to move amongst them during the intervals. In New York, Emily, who played Kate Nickleby, met more than her fair share of stars; in fact it was Liza Minnelli who said to her: ‘You have got to take this show on a world tour.’ And I almost found out Andy Warhol’s opinion. One night in the evening interval, I was just about to walk the plank, literally, out into the audience and there he was, with his unmistakably fixed and flyaway ash-blonde hair, sitting in the stalls, about seven rows back and maybe six seats from the end, ravaged and wraith-like, though he was only fifty-three at that time. Well, one of his starlets had taken a pot shot at him in 1968. Such was the creative strain in The Factory.

Warhol was in placid, or rather constrained, interval mode, dressed in a nondescript dark suit, sitting below me on the right, perhaps fifteen feet away, amongst a few empty seats, the people around him not having yet returned. He was quite out of the celebrity-studded context in which he had been so frequently photographed, and remote from the goings on in his Factory bedecked in silver foil. For a moment I doubted my own eyes. There were no sense of a party, no movie camera, no adjacent teenagers in and, half or entirely, out of denim, nobody screenprinting, composing music or filming the proceedings. He looked astonishingly alone.

CHARLES DICKENS MEETS ANDY WARHOL. Could there be a more unlikely encounter? I sit here aghast at the lost opportunity because Newman Noggs could have met him. Was it timidity on my part? Actually, he was the one who looked timid and vulnerable sitting there, so much so that I felt as if it would be invasive, exploitative to take advantage of my opportunity. It was as if the time had come for him to experience his fifteen minutes of anonymity.

He wasn’t even reading the programme, always a useful theatregoing activity to defend oneself from looking friendless or at a loose end when alone in a theatre seat. There can be a special security, a dignity even, in sitting alone in a church pew, where one can elect to be in the Presence and not alone at all. Carefully bearing his burden of being Andy Warhol, he disturb his ever so slightly uneasy gaze to take me in; so I left him there alone, looking like a piece of flotsam that had floated away from its jetsam, when I could so easily have sat quietly beside him and said … what? In my make-up and aged, tattered Victorian clothes, selected from an obscure rail at Nathan’s back home in Camden Town, I don’t think I could have worked out what to say, or who to be, in relation to this fragile contemporary icon, whom the press and whose own publicity machine had made public property. In this context he seemed delicate and entirely private property. In what capacity would I have introduced myself? He was an artist and I one of the artistes, to give the term the French spelling I remember from notices bearing lists of backstage rules in the days when I played the kind of theatres where Variety was usually performed.

Just recently I have depicted visually this momentous near miss of a meeting – the latest illustration for Slim Chances. 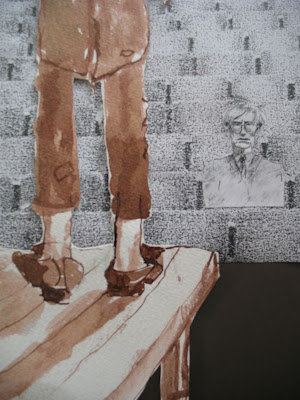 Although he did not stay with the cast of Nickleby for the New York season, I still vividly remember the Vincent Crummles of Graham Crowden. Graham died last week aged eighty-seven. I particularly remember him in a tiny scene in the play’s second half. Crummles had been out of the story for some time and Graham had played another part (that of Walter Bray) in the interim, but he reappeared, ran into Nicholas or rather, like the figurehead on a ship’s prow, entered majestically on a moving truck from stage right and the audience invariably applauded – as though they were welcoming back an old friend. He was already my old friend for we had played together at the Old Vic, shared many jokes and eventually a dressing room with Jeremy Brett, Derek Jacobi and Ronald Pickup in Olivier’s National Theatre.

And, of course, in 1967 he had created The Player in the premiere of Stoppard’s first stage hit Rosencrantz and Guildenstern Are Dead. Graham’s Crummles was all benevolence, but the theatricality of his Player was, if not malign, then somehow in possession of a dark fatalistic secret which glittered through the humour and flamboyance of his definitive performance. The look of his tatterdemalion figure and the bite and incisive wit of Stoppard’s lines I can still see and hear. He had a way with words: one afternoon a year or so ago I woke from an afternoon nap to hear him in a classic play on the BBC World Service, speaking the dialogue faultlessly. He was a classic! Eccentric and classic.

5 thoughts on “A BRUSH WITH WARHOL”