How many degrees of separation does the famous concept stipulate? I imagine that to have been named after a famous public figure doesn’t count, but I was named after King Edward VIII who, just four months after my birth, abdicated.
And my older brother, in his policing days, once had occasion to deliver a document to Bishop Blunt, the Bishop of Bradford, who answered the doorbell himself and accepted delivery from my brother’s hand; the very Bishop Blunt who had blown the lid off the Edward and Mrs Simpson scandal, and you could say precipitated the abdication, when in a speech to his Diocesan Conference he spoke of the King’s ‘need for grace’ and was duly quoted in Bradford’s Telegraph & Argus. 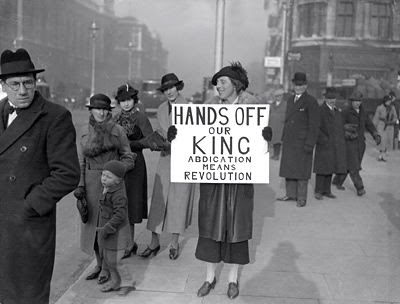 I have mused on this today, having seen the film The King’s Speech, in which the abdicating Edward has a supporting part, so to speak. I might well have had a supporting part in the film myself, a tiny one – the Harley Street specialist who, in the tradition of Demosthenes and Henry Higgins, makes the hero and future King George VI hold marbles in his mouth. I am glad to say that one of my old colleagues, Roger Hammond, played it – convincingly – I remember bumping into him at the audition. But he played it in a way I could never have done as he must weigh at least 20 stone, and was therefore a good contrast to Geoffrey Rush as the speech therapist, Lionel Logue, who wins the day. Rush is more my build and incidentally trained in the Lecoq school of mime, as I did. We met for the first time in 1998 in my dressing room in Newcastle’s Theatre Royal, after I had played Master Ford in Ian Judge’s RSC production of The Merry Wives of Windsor and Geoffrey had spent the day on location as Philip Henslowe in Tom Stoppard’s screenplay Shakespeare in Love – Tyneside pretending to be Bankside.
Talking of degrees of separation, what award-ceremony madness nominates Colin Firth alone? Is it beyond the wit of those who decide these things to see that one might as well separate Laurel and Hardy as Firth and Rush; the relationship is everything! I see that Rush is named as an executive producer in the credits and I wonder if he had something to do with the brilliance of the script, for the way his character is depicted going about his treatment of  ‘Bertie’, a method the real-life Logue invented himself, is utterly convincing, dramatically and psychologically fascinating.
Not least of the film’s delights – along with the strange pleasure of frequently being moved to tears – is seeing familiar bits of London in a new light, an empty Westminster Abbey at night for instance – awesome. But here once again I claim kinship with kingship. Some years ago, my wife Emily and I gave a recital in the Abbey’s Jerusalem Chamber, the room in which by the fireplace King Henry IV died:
It hath been prophesied to me many years,
I should not die but in Jerusalem;
Which vainly I suppos’d the Holy Land.
But bear me to that chamber; there I’ll lie;
In that Jerusalem shall Harry die.
(Shakespeare, Henry IV, Part 2)
After supper the Dean showed us past the open door of a bathroom, as I remember, and through an adjacent ancient door, directly into the historic Abbot’s Pew, and suddenly at 10.30 at night we were looking down from our oak perch above the south aisle onto the silent nave of the deserted Abbey. There was the intermittent glimmer of the traffic’s headlights moving beyond the dark stained-glass windows, but otherwise the impression was of venerable age, the weight of history carried lightly in the soaring grey Gothic columns as the Dean talked of the almost 150 years it had taken to complete what we saw, whilst the stone, builders and masons were being financed by monarchs we only knew as Shakespearean characters, Richard II and Henry V. All this we experienced in the dim light from where, when it was a monastery, Abbot Islip once kneeled.
What happened is one thing, History and Historical drama another …
Linking back to the actual man Logue, who controlled George VI’s stammer and held a night-time Abbey rehearsal with him on the eve of the Coronation, it so happens that he was killingly handsome, especially when young.
It also happens that the Elder Conservatorium of Music in Adelaide where he was trained, and assisted elocutionist Edward Reeves, was the very place where one Charles Gordon, who was my voice teacher at drama school, taught during WWII. But that is not enough and doesn’t have a sufficiently Royal ring to it to be the tag to this Royal Blog. Except that the degrees of separation can be narrowed. Kathleen Riley discovered Charles Gordon’s secret career! He never divulged to us that, along with his performances as a baritone, he was an accomplished campanologist and was advertised as ‘The Monarch of the Bells’. In fact, in May 1937, he posted an advert in The Stage in which he billed himself:

I also recognized some of the exercises ‘Bertie’ was put through from the room in Chapel Street, Bradford where Charlie taught us, only a short walk away from St George’s Hall. In 1933, on a certain raised terrace on the flank of the Hall, my father and brother Billy found a position from which to see to advantage the arrival in our city of Edward, Prince of Wales. Just four of the prince’s words – ‘Something must be done’ (about the plight of the unemployed miners in Wales) – had endeared him to working people, but apparently angered elements in the Establishment. 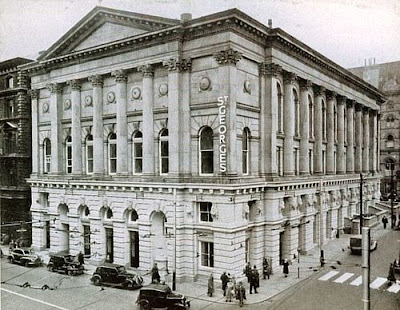 And it was flanking that same building in 1954 that I waited to see Queen Elizabeth II on her way to lunch at our Town Hall.
By that time I was becoming quite fluent in what we called The Queen’s English, though I had taught myself, with the help of BBC Radio, from the time when it was still The King’s. I end Happy and Glorious!
***************
In the year of the Queen’s Golden Jubilee, 2002, Emily and I presented a show or our own devising called Pomp and Force of Circumstance, which included this poem about the momentous events of 1936:

3 thoughts on “DEGREES OF KINGSHIP”