Last Sunday I attended the Midsomer Murders farewell garden party for John Nettles near Great Missenden. It was like a bumper edition of the show – lots of smart and pretty straw hats, though no suspicious looks. John gave a short speech in which he acknowledged his OBE, but said it stood for ‘Other Buggers’ Efforts’. He told me that the first thing he is going to do is play the Ghost and Claudius in a production of Hamlet at the Sheffield Crucible. Marcia Warren was at the party; she played my housekeeper in the Midsomer episode I appeared in three years back. She told me I was excellent. Seeing her in the repeat on ITV just the other night, I was right to say she was perfect.

Here is a compilation of some of my scenes as Lord Holm in ‘Death in a Chocolate Box’:

I regretted that the drug-befuddled, misused lord had no last scene in which to show his reaction to his new-found innocence (no, what Aristotle would have called, anagnorisis – a moment of recognition or critical discovery). What were the programme-makers thinking of? The forty-second coda I offer here by way of webcam is an age to hard-pressed producers with all those shots of cars pulling up and away to consider, but it makes me feel better.

My brother rang me up and asked wryly if I had discovered any blue blood in the family tree, since I seem to get away with playing lords. He doesn’t do computing so I can’t at the moment point him in the direction of Bill Naughton’s Joe Brady, my last week’s working-class hero. Noble is a word that begs a lot of questions and takes some defining, but one might apply it to Joe, who felt something like the ennobling effect of a day’s work as a coalbagger.

Last Tuesday at the National Theatre I saw the penultimate evening performance of The White Guard by the Soviet writer Mikhail Bulgakov (in an adaptation by Andrew Upton). Extraordinary how relatively few performances it has done. It was the nearest thing to being in Kiev in 1918. Where do all these excellent actors come from? In my ignorance I knew only one of them. The director Howard Davies I worked with long ago. His production I found quite flawless, masterly. One is amazed to think that Stalin saw the Moscow Art Theatre performance twenty times – but perhaps not so amazing if their production was as good as the NT’s and, of course, it must have been. Odd how one catches oneself out assuming that the theatre must be better now than it was way back, the further back the worse. On the other hand, I also catch myself out in the reverse attitude, being particularly astonished at how superb so many young actors are nowadays. 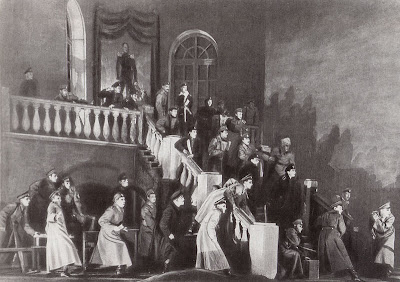 The Days of the Turbins (aka The White Guard), Moscow Art Theatre, 1926. Directed by Stanislavski. 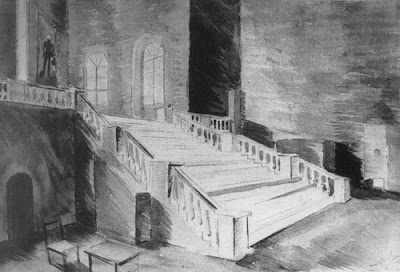 This week I have read two pieces of writing by my daughter Dora and her friend Ruth in Edinburgh, posted on Ruth’s blog Cocktails and Feminism. They both experimented in two consecutive posts, composing ‘snapshots’ of Edinburgh. If ever you wanted to define the essence of what a blog should be and what it should do, you might look at these delightful and successful experiments in ‘Free-Writing’.