A brief word from the editor
I’m delighted to announce that Edward is putting the final finishing touches to his eagerly awaited volume of essays, and that the completed manuscript will be with the publishers this week.
Slim Chances and Unscheduled Appearances will be officially launched in early spring. A National Theatre Platform is being planned to mark the book’s release. News of this, and other book-signing events and readings, will be posted on Edward’s website nearer the time.
In the interests of preserving the author’s modesty, I will let the book, when it appears, speak for itself. Suffice it to say, my work as editor has been an immense privilege and joy. Slim Chances is not only an eloquent and engaging memoir, but also a uniquely valuable contribution to theatre history.
Below is a sneak preview of the draft cover design. 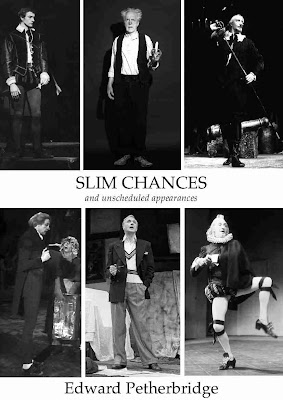 (Click image to enlarge)
I can also announce that, as something of a foretaste of the book, a new short film from Petherbridge Studios is imminent.
K.R.

4 thoughts on “GOING TO PRESS!”