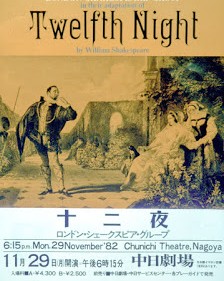 Summer night:
ruined mountains, rivers
cry out with one voice. 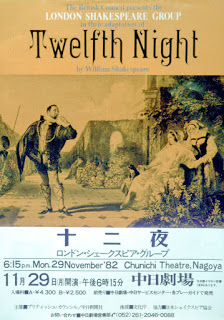 Today, we have been thinking, Emily and I, about
our visit to Japan in 1982. We were on a British Council tour of the Far East,
playing Viola and Feste respectively, and what we remember chiefly is the
friendliness of our audiences, our hosts in Hiroshima. We performed in a
college there and at the end of our show some students played traditional music
to us and there were speeches of welcome and appreciation. A party even
came to the station to wave us off.

Here in West Hampstead there is a Peace Park
too. Its opening on 9th August 1984 had been timed to coincide with
the 39th anniversary of the bombing of Nagasaki. Among its symbols
of peace is a white crane, representative of the origami cranes made by Sadako
Sasaki, who was two when the bomb dropped on Hiroshima and who, ten years
later, died of leukaemia caused by radiation exposure.
And among the messages of peace embedded
in a path through the park is a plaque inscribed with the words of the Mayor of
Hiroshima.
It is worth mentioning that less than a mile north of the
Peace Park lies the grave of Joseph Rotblat, a longtime resident of West Hampstead and the only physicist to leave the Manhattan Project on the grounds
of conscience. In 1995, he was awarded the Nobel Peace Prize for his efforts
towards nuclear disarmament. His gravestone bears the words with which he
concluded his Nobel lecture: ‘Above all remember your humanity.’
Click here to cancel reply.