Bear with me, but understanding things in theory is no substitute for understanding through hands-on experience. Perhaps that’s why so many government attempts to improve the way things work go wrong, though in Melvyn Bragg’s The City, Part Two on BBC Radio 4 this week we learned that it was only the intervention of government, the forming of the London County Council, taking responsibility for water, sewage, and education, that saved London from the pernicious free-for-all it had become in the mid-nineteenth century.
Forgive the ludicrous connection, but being lighting cameraman, dolly grip, dialogue coach et al, as well as solitary genius at work on my little webcam film, Graveyard Ditties II, has brought home to me just why one has noticed in the past that the only contribution a film crew member might make on a given day sometimes seems merely to be holding an umbrella over the camera, or supplying a strip of gaffer tape at a crucial moment. Would there had been someone on hand just to put a wedge of paper under the gramophone leg the day before yesterday, or to notice that stray wisp of hair …

This film is truly international in that my friend and editor, Kathleen Riley, has made her vital technical and artistic contribution from Sydney, Australia. The city and all its works has come a long way! No arm of government intervened to ask what I was doing with a four-legged stool and an Apple Mac in the local cemetery.

I should add that no mourners were disturbed during the making of this movie.
HMV
Meditation on Francis James Barraud, ARA and his dog, ‘Nipper’, portrayed in His Master’s Voice
His Master’s Voice we do not hear
The diminution now I fear
Of HMV’s thought more efficient
Pithier and quite sufficient.
The trademark dog of James Barraud
Abbreviated, I’ve deplored
But on the painter’s grave you’ll see
The chiselled letters – RIP.

If I add some extra lines …
‘Nipper’ – famed amongst canines
Buried near a mulberry tree
Now beneath Lloyds TSB
(Known for his silence, not his bark
Commemorated by a plaque).

Whilst on the subject I should say
Francis Barraud, ARA
Letter-fettered as you see
So ends my ditty: QED.

Nomenclatures! How they have crammed ’em!
Quod erat demonstrandum
Whatever’s deemed our appellation
Too soon comes abbreviation
GYRBWYM
Gather ye rose buds while ye may …
Amen
********
Seeking where they laid his bones
Where we hear no gramophones
Rather, see his strolling player
Poised: Barraud! Our fine portrayer
Of the folk whose work is play
Here is constant light of day. 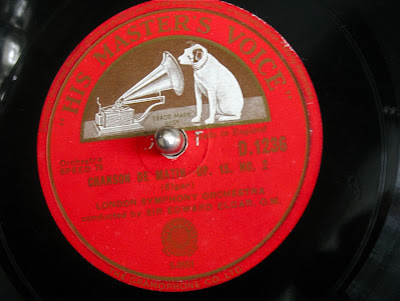