Of Fortune Green and its immediate environs, north of West End Green, the book tells us: ‘On the west side it is completely lined with small new houses. The Green at the top still remains open for the geese to hiss and cackle over at their will. The Hampstead cemetery lies on the north. This consists of about 20 acres of land, and two-thirds of it was consecrated by the Bishop of London in 1876.’

I love the description of the bus route, West End Lane leading down to the Tube, as a deep-hedged, tree-shaded alley. It still winds, having been formed by horses finding the easiest way up, so that one can never anticipate whether a bus is coming or not. On the edge of West End Green we are told there was still in 1896 the old Cock and Hoop inn, by which time the modern streets of terraced housing had been up for three years.
The bucolic idyll presented by West End and neighbouring Kilburn – soon to be encroached upon by the railway – is also described in an 1859 issue of The Gentlemen’s Magazine:
That part, properly called Kilbourn, which gives name to a beautiful suburb, has its stream flowing through some of the most charming sylvan scenery in the neighbourhood of London; and the jaded inhabitants of that vast human hive can do no better than refresh their weary senses by a stroll at its side. … The stream crosses the road and pursues its way through a meadow to West-end, by the ‘Cock and Hoop Tavern,’ remarkable for its shade of dipt lime trees, a shelter from both sun and rain. West-end has the quiet seclusion of a village; the brook is here concealed, but it follows along the course of the street, on the left side of which, in a garden wall, is a conduit head; passing this it soon reappears in the fields, meandering towards the Edgeware-road in the line of the railway now constructing. 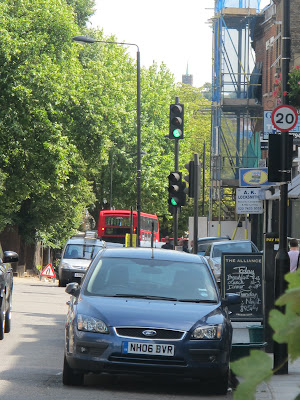 As I hear tonight news of the urban riots in London – even in Hampstead – I read that in July 1819, extra constables were called to West End Fair to detect and apprehend the various gangs, armed with bludgeons, who attacked defenceless individuals – pushed people down, robbed them of their watches and money, stripped them ‘of even their wearing apparel, and left them nearly naked’. Violence had erupted at the Fair seven years earlier, too, when the clown from Saunders’s corps of horsemen and tumblers fell into an altercation with a group of ‘peace-officers’ who drew their cutlasses and attacked him. The poor clown barely escaped with his life.
I trust our local Sainsburys and Tescos are unscathed and that no cars have been torched. The night seems quiet from where I sit – as quiet almost as when the inhabitants of West End Hall claimed to have heard the cannon at Waterloo (the British guns were made in the old Bowling Iron Works, which had been a ten-minute walk from where I was born in Bradford). I will think of the rainbow that glowed in the rain and sun about 7 o’clock and I will read Hunt’s poem about rain in the night, perhaps heard through his window down at West End:
Nought will I have, not a window-pane,
’Twixt me and the air and the great good rain,
Which ever shall sing me sharp lullabies;
And God’s own darkness shall close mine eyes;
And I will sleep, with all things blest,
In the pure earth-shadow of natural rest.
Tuesday, 9th August

I did not hear the smash of glass last night as a window of the local Carphone Warehouse was forced out onto the pavement, five minutes walk away in Finchley Road. No sign of a clown in West Hampstead, but this evening I saw a juggler quietly practising on Fortune Green and, as the sun went down, who could not but be struck by the stately dignity of the plane trees. 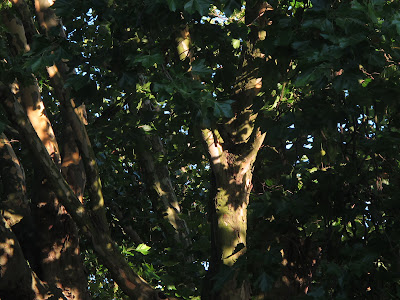 Photo by EP
Finally, I was also struck by some words on the back cover of the Roy Brooks’s booklet: ‘If we took the brakes off and used some of the half million on the dole, 1963 could bring a good home for every young couple and get some of the old ’uns out of their hovels.’ 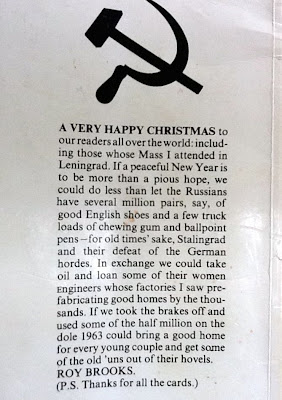 But somehow the eccentric 60s socialist estate agent’s vision of solving housing problems – any problems – by recourse to something in the nature of Soviet five-year plans seems a far more romantic notion than roses round a cottage door or being able to put Westminster on one’s notepaper or going in search of ‘ancestral portraits’ in The King’s Road. I note that a sixteen-year-old lad who commited robberies at West End Fair in 1819, when those bone fide cottages still stood, was hanged … but how many millions did Lenin and Stalin’s utopian schemes kill?

2 thoughts on “THE HOUSE BEAUTIFUL”