IN THE LAP OF THE GODS

It can be no secret that, on the whole, the London critics have not taken to The Fantasticks. The Daily Mail was particularly ungracious, not to say offensive: what worker in the most mundane job would get away with confessing to falling asleep, but the Mail’s man boasts of his inability to stay awake almost as a badge of honour, whilst taking chauvinistic side swipes at the Japanese involvement in the production. Unless I misconstrue his syntax, he attributes a line to my character (‘Read on, Macduff!’) which is, in fact, spoken by Clive Rowe – not easy to confuse us, I would have thought. But in spite of the critics’ disparaging tone (and somnolence), I heard the usual spirited rendition of the overture coming over the Tannoy as I got ready on the evening after press night, and melted at the tender segue into ‘Try To Remember’. Whoops and cheers and laughs were not in short supply that night either.
The dip in attendance the West End took tonight because of the World Cup provided us with a small but engaged audience, and, although some of the cast crowded round a television in the interval to see England moving towards a draw, not one of them showed the slightest sign of falling asleep on the job in the second act, or betraying their disappointment at the score.
I am reminded of my old colleague Edward Hardwicke who appeared with Peter Ustinov in the latter’s play Photo Finish back in 1962. I had seen the play at a summer matinée at the Saville Theatre (now a West End cinema) two years before Edward and I met as supporting actors in Olivier’s Othello at the NT. He told me that during Wimbledon fortnight there was a television installed just off stage so that they could keep an eye on the Championships, and both he and Ustinov had methods of conveying the score to one another when they made their entrances. I still remember Ustinov’s rich comic stage presence in the play, with no hint of an off-stage life of ‘Who’s for tennis?’.

Talking of the show’s Japanese connection, you will see over my dressing-room mirror a framed portrait of the Shinto goddess Ame-no-Uzume-no-Mikoto who looks after actors. Next time I will tell you how she got me the job. 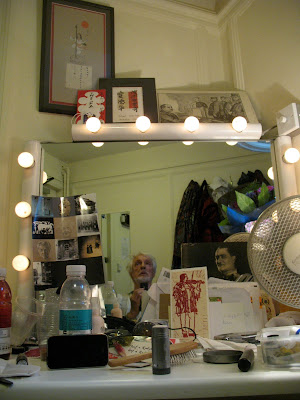 Postscript
I am preparing to read Jill Paton Walsh’s new Wimsey novel, The Attenbury Emeralds; recording begins tomorrow. It is fascinating to meet what seems to me the authentic Wimsey and Harriet just after the Second World War.

4 thoughts on “IN THE LAP OF THE GODS”