When every theatre has been replaced by 100
cinemas, When every musical instrument has been replaced by 100 gramaphones,
when every horse has been replaced by 100 cheap motor cars, when electrical
ingenuity has made it possible for every child to hear its bed-time stories
through a wireless receiver attached to both ears, when applied science has
done everything possible with the materials on this earth to make life as
interesting as possible, it will not be surprising if the population of the
entire civilized world rapidly follows the fate of the Melanesians. You will
see that the death of Marie Lloyd has had a depressing effect, and that I am
quite incapable of taking any interest in any literary events in England in the
last two months, if any have taken place.

T. S. Eliot, The Dial, December 1922
Ninety years ago this month, Marie Lloyd, ‘Queen of the Music Hall’, was laid to rest in (West) Hampstead Cemetery at the age of fifty-two. Her grave is still festooned with colourful floral tributes.

T. S. Eliot, who devoted his ‘London Letter’ of December 1922 to Marie Lloyd’s passing, was a former resident of West Hampstead. After his marriage to Vivienne Haigh-Wood in 1915, he lived for a year or two with his in-laws at 3 Compayne Gardens, a house he described as rather gloomy, with long dark corridors and imposing iron gates, and a stout garden wall.

Among those who sent wreaths to Marie’s funeral were the ventriloquist Arthur Prince, whom you may remember as the subject of my first Graveyard Ditty, and the Edwardian stage stars Fred Terry and Julia Neilson. All three are buried in West Hampstead, not far from Marie’s grave. 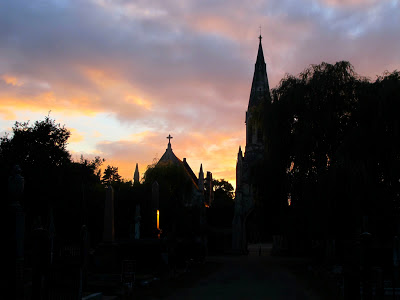