IN THE PRESENCE OF A MASTERPIECE

I have been offered that job I was auditioning for, by the way. I am not being coy, but I can’t tell you what it is; my agent sweetly phoned me last thing on Friday, so that I’d know the news before the weekend, but the deal is not done yet. I had been recalled, and the second audition was so much fun that it was almost a consummation in itself.
An actor friend of mine bought a cheap device from Tesco which enabled him to project a large image of a film actress (remembered from his youth, some ten years back) onto a wall of his flat. He had pushed the contrast so that it was a simple two-tone image, easy to reproduce in paint. He showed me a photograph of the result, and if the auditions don’t work out for him, he could have a future as a hands-on interior designer. It’s a stylish little decorative masterpiece.
We met in a Christmas TV Special, The Clash of the Santas, some eighteen months ago. He works as a regular in a German TV series but, being perfectly bilingual, has worked in theatre here. He offered me a ticket for the Festival Hall last Thursday, not having found anyone else with classical taste free to go. I arrived late, but was rewarded with the fifty-minute second half – Mahler’s gigantic 5th Symphony. We were sitting in one of those pull-out drawers high up on the side, and it was while looking down on the Philharmonia Orchestra that I had the unoriginal thought that the symphony orchestra must be one of humanity’s greatest achievements.
Going a few stops on the bus today, I stood near a violinist who sat modestly cradling her instrument, and I remembered the exquisite sound issuing from the string section far below in the Festival Hall; the bus was crowded and her face did not invite conversation (in fact, if one talks to a stranger on a London bus, one sometimes causes alarm or is assumed to be mad). If she was an orchestral player, she must be used to extreme behaviour, but there she sat, prosaically, as if melody and eccentric communication were far from her thoughts. She might have been amongst that string section on Thursday being conducted by Leif Segerstam who looks like a huge Henrik Ibsen (or Darwin), so portly that the very slow walk to the podium seemed a trial, but once there, he was soon appearing to dance, and twice he mimed singing at the first violins to spur them on in their cantabile. 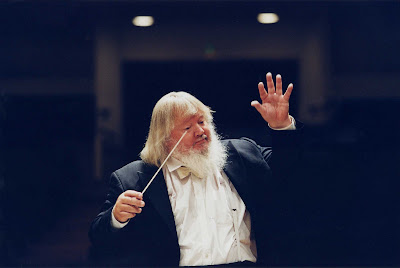 One often wonders what difference these conductors’ gestures make; certainly any one of the players had his or her work cut out fulfilling the obligation to manifest Mahler’s magnificence. The whole experience made me determined to drop into the concert hall as often as I drop into art galleries. One needs to remind oneself how magnificent life can be. One spends so much time going prosaically from A to B – somehow, thank God, protected from the cruel extremes of life we hear about on the news. Whilst there is yet time, one should not pass up the chance to be in the presence of a masterpiece. Last week a friend castigated me: ‘A blog is meant to be full of immediacies, not polished, sophisticated reflections.’ I hope he is happier this week!
I have a ‘masterpiece’ of my own to complete – as I mentioned last time, it is the realization of the picture my character was painting in Stoppard’s Artist Descending a Staircase last month. I have completely re-landscaped its garden. Maybe next week I will sneak in a glimpse and this loose talk of masterpieces will cease.


One thought on “IN THE PRESENCE OF A MASTERPIECE”