JUBILATIONS AND DRESSING UP

‘Up to a thousand boats will muster on the River Thames in preparation for the Thames Diamond Jubilee Pageant.’ So says The Times today in its Jubilee Weekend Guide.

In 1956, three years after Elizabeth’s coronation, Kenneth Tynan wrote marvellously about a rendition of ‘God Save the Queen’. The occasion was the first visit of a theatre company from behind the Iron Curtain. I remember the almost feverish anticipation whipped up by those critics who had been to East Berlin and, as I stood at the back of the circle in the Palace Theatre, I heard the tantalizing fanfare the little pit orchestra of the Berliner Ensemble, weaned on Kurt Weill, made of our national anthem. It was played delicately, as if for a marionette theatre, and with a touch of Handel about it. If we felt our queen and country were being ridiculed, Britain could take it and enjoy the sophisticated, elegant joke. In any case, it was an improvement on the standard pit orchestra rendition. Tynan saw it differently:

The orchestration is backed by a trumpet obbligato so pompous and feeble that it suggests a boy bugler on a rapidly sinking ship.

Which brings me back to tomorrow’s enormous flotilla. We have had the last laugh. The Berliner Ensemble sails on of course but no longer as the cultural flagship of the German Democratic Republic. Of all the revolutionary demonstrations we have seen of late, none have been so benign and bloodless as the tearing down of the Berlin wall.

It so happens that I woke to the words of Gyles Brandreth this morning; he was on the monarchists’ side of the Today debate on Radio 4.

Then I arrived at Clapham for a rehearsal of the musical of The Importance of Being Earnest where he was already singing Lady Bracknell’s part in the number about the handbag. Later he told me he was gong to be the last person to board the last boat in the flotilla and that behind him would be the London Symphony Orchestra. The clue to the success of our Royal Family is, he had said on the programme, the combination of fairytale and history. He and Steve Bell (for the opposition) got nicely tangled in the last moments of their war of attitudes. Gyles had been talking about crowns and fancy costumes being no more real than the Archbishop of Canterbury’s earlier gushing words. ‘Nothing  is real’, and Steve Bell chimed in ironically, pity he didn’t sing: ‘Nothing is real and nothing to get hung about.’

‘Strawberry Fields Forever’ for National Anthem? Well, no. Perhaps they were both missing, or avoiding, the point. Only last night Kathleen and I were looking at a coin of the realm and marvelling that even one of the most recent date still bears the inscription DEI. GRA. REG. FID. DEF. (DEI GRATIA REGINA FIDEI DEFENSOR), which, as all good subjects know, meaneth ‘By the Grace of God, Queen and Defender of the Faith’. Perhaps that is something to get hung about.

Weather permitting, there is to be a community lunch on our green tomorrow. I rather liked seeing it at its quietest tonight: two young oriental men gracefully practising tai chi and a muslim praying to Mecca, though curiously he seemed to be facing south towards the River Thames. 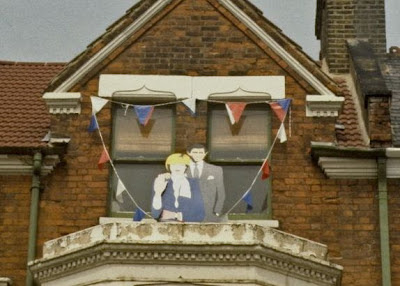 3 thoughts on “JUBILATIONS AND DRESSING UP”