The foxes have holes, and the birds of the air have nests …
Bean (our dog) gave the seal of approval to our new Afghan carpet – yes Afghan, and from the province of Kunduz. Not a mile away from Kilburn’s Tricycle Theatre, where I saw the twelve plays about Afghanistan I’ve spoken of so recently, there is a carpet shop which is having a closing-down sale. The sales talk revealed yet another facet of life in that troubled country: ‘You won’t get these carpets in five years’ time – they are made in people’s homes, and people are out working in offices, working for NGOs, sitting on plastic chairs, looking out of the office window, issuing forms: you can’t park here, you can’t go there.’ The young man who carried the carpet to my car told me he had lived here since he was five years old and gone to school here, but I noticed he still spoke English with an Afghan accent.
As soon as the reassuring classic pattern was laid, woven I had been assured in wool of the first shearing, Bean began to loll and luxuriate on it. The old, coarse-weave carpet it replaced was going to grace our little conservatory, which had been paved with, by now rather challenged, cork tiles on a concrete base. A man came to lay some underfelt; as soon as that was down, Bean celebrated by running round on it excitedly in small circles. 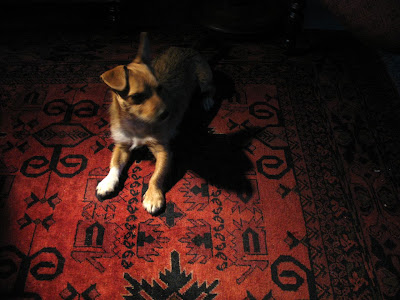 It is a truly international effort, the modest refurbishing of our house; what with the new carpet and, not before time, the outside window frames being repainted and the conservatory roof, never leak-proof in its twenty-two years, repaired (already it has stood up perfectly to the wet weather), all thanks to a team of men from Romania, the painter and, from Poland via Chicago, one of the roof repairers. Clearing the way for them, I found a bird’s nest on a high ledge, obscured by the grapevine that forced its way inside three years ago. I was harvesting the ripe crop, and there was the small songbird’s abandoned mud and straw home, brought inside by us as an ornament, still with some fragments of shell from its young. Astonishing that the tool used to construct it was the bird’s beak – I don’t know what kind of bird or whether the male and female both do the work, but I surmise they were international too, annually migrating impossible distances.
Impossible to muse on these things without remembering the unprecedented havoc and suffering caused to homes and livelihoods by the monsoonal rains in Pakistan, and what a difference we who have, so far, safe homes can all help to make. 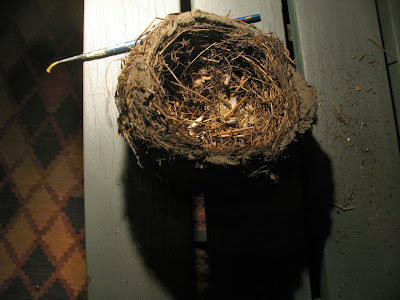