A MOMENT BEFORE THE MATINEE

Tuesday morning: I am determined to keep faith with my so-called weekly posting three days late, though I must leave in time to get to the physical warm-up for an odd matinée very soon. We have our Press Night tomorrow and so our Wednesday matinée is today if you follow. Some critics crept in last night, we were told, so why bother!
The camera lies! It exaggerates contrast, so that my clown companion Paul Hunter, whose face your eyes would discern on stage at this moment in muted shades, is shrouded in underexposure, but he shows up in our struggle to get me into the ‘doublet’. 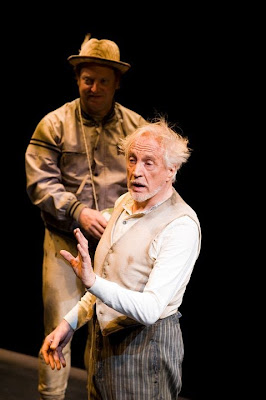 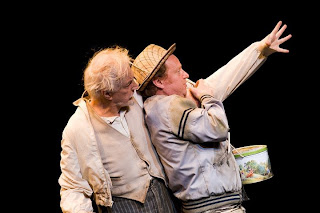 Our stage doorman, a mysterious American who, I gather, in the past has had personal dealings with the creators of The Fantasticks, Jones and Schmidt, gave me a strange note at the stage door as I left last night. It was from a lady telling me that she and her husband were in the bar of the Waldorf Hotel, just round the corner from the Duchess – would I care to join them so they could buy me a drink? Out of curiosity and a sense of duty – perhaps we were already acquainted, though the name didn’t ring a bell – I popped into the quiet chic of the hotel, glancing at the glass-paned doors leading to the ballroom. They were shaded by translucent blinds, glowing with light from the silent interior. I did not think that the ghosts of Harriet Vane and her ardent suitor Lord Peter would, at that moment, be dancing beyond to the unheard strains of ‘The Haunted Ballroom’ or even ‘Crazy Rhythm’ as they did in this location twenty-four years ago – and might still be somewhere in the world on DVD. Rather, I was wondering whether it might be quicker to go home by bus or Tube; I still haven’t decided.

The bar had no smiling couple so I left but, peeping over a wall into an alcove, I heard ‘Mr Petherbridge’, and a well-dressed lady extracted herself from a table and came round to hear me explain that I couldn’t stay for a drink. She in turn explained that things had gone wrong and she hadn’t seen the show but had been at a dinner with Lady Thatcher. So far, so odd. How was Lady T, I wondered. ‘Well at eighty-four she still made the occasional sharp or amusing remark’, the lady replied. She had obviously improved with age was my private subtext as I left, musing on the comedy of old age that I had played that night and – how time flies – must again soon. (I note the sun is coming out – a sure sign of a matinée day.) Poor dear, impoverished, forgetful Henry Albertson. A mental warm-up as well as a physical and vocal is needed so that Life doesn’t imitate Art and I make his incompetence ‘sharp and amusing’.
Yes, I really must go now, perhaps via St Pancras – or shall I be lordly and hail a taxi?

10 thoughts on “A MOMENT BEFORE THE MATINEE”