Space and Light is the title of a new Edward Gordon Craig exhibition in the V&A’s Theatre Galleries, but both elements were in short supply at the official opening on Friday evening. We were crammed round a large model rhinoceros, the theatrical significance of which eluded me – unless there was an implicit reference to Ionesco. As we listened to the Director’s speech listing the people to be thanked (‘If you don’t like it, tell her; if you do like it, tell me’ was a witticism he judged worthy of repetition), the staff excitedly whooped their favourite curators and we guests had the impression that we were mere onlookers at an in-house jamboree.
The usual Craig woodcuts were in evidence round a corner, nicely framed, and although I happen to know most of them, indeed posses some signed examples, and am very familiar with others from reproductions, I always find it refreshingly pleasing to see them.
The main feature of the exhibition, however, was an installation: a sombre sort of fairground booth in which I suppose six people at once could view some projections. I didn’t spend long inside, but the projections seemed to be of Craig’s cut-out figures seen against arrangements of his famous screens, disappointingly lacking in atmosphere. That marvellous radio voice of Anton Lesser (never did I imagine I could prefer somebody else’s reading of ‘Ode to a Nightingale’ to my own until I heard Anton’s), speaking Craig’s words, sounded curiously light. I presume they played the famous recordings of Craig’s voice, curiously deep; if they did, the contrast must have been surreal.
Sir Michael Holroyd was pointedly allowed no more than five minutes to speak, and used them expertly to tell us what a controversial, influential and inspiring figure Craig was. You’d not guess it on the evidence of the exhibit. A curious case, Edward Gordon Craig, a subject in media studies and theatre history, a revolutionary figure, harbinger of modern stage design, the discrediting of Victorian illusion and the scene painter’s romance, literal domestic realism. But if anybody wants a tour round the old Lyceum, long before it was refurbished for at least the second time in readiness for The Lion King, and would like to scent the air of the place in the late nineteenth century, when Sir Henry Irving was actor-manager and Gordon Craig a young actor in his company in which his mother Ellen Terry was leading lady, they could not do better than to read Craig’s affectionate and evocative memories:

On the prompt side there were two Greenrooms where the actors looked at themselves in pier-glasses. … On this side of the theatre was also the property room and one of the largest of several scene docks; and upstairs, Hawes Craven’s large scene-painting studio, and the Beef Steak Room [where Irving would give suppers to friends and distinguished guests after the play]. 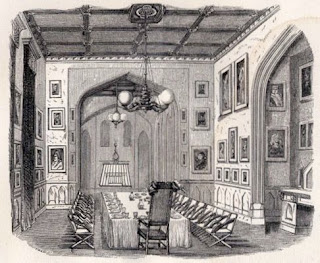 The Beef Steak Room
But now, in our tour of ‘the strange darkened realms of the place’, we come to the pivotal moment when Craig describes the stage filling up with costumed actors and mentions ‘Arnott, the property-man – whose apple tree in that scene was a masterpiece of realism.’ The operative words being ‘Tree’ and ‘Realism’.
Next we must go to Ellen Terry’s house in The Kings Road (these days there is commemorative brown plaque). The erstwhile Lyceum actor, John Martin-Harvey, a slightly older contemporary of Craig’s, describes in his autobiography the day when the young Craig was showing him his ideas for scenic effects, manipulating ‘rectangular blocks of various forms and size – rather like a child’s box of bricks.’ Harvey was amazed to see the great variety of localities Craig could thus suggest, but at the same time imagined what a Herculean task it would be to lift and use these shapes on a real stage. He wondered about suggesting verdure: ‘Yes, but Teddy,’ he said, ‘what will you do for a tree?’ Craig continually ignored this question until Ellen Terry took from the mantlepiece a little Bavarian toy tree, clapped it down on the blocks and said, ‘There, Jack, will that do for your blessed old tree?’
When I was playing in Nicholas Nickleby in New York in 1981, I spent a couple of Mondays off at the Harvard Theatre Collection. I had persuaded them that Craig’s fretted tree screens needed to be seen in light and space. I jumped off a plane and hired some lights and a photographer’s roll from a camera shop. They were carved wooden screens about ten inches high, never realized by him on the stage. 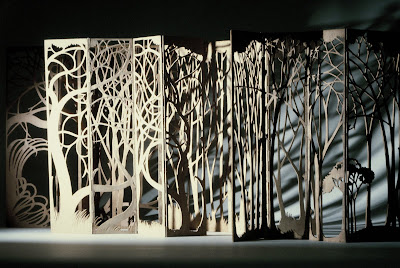 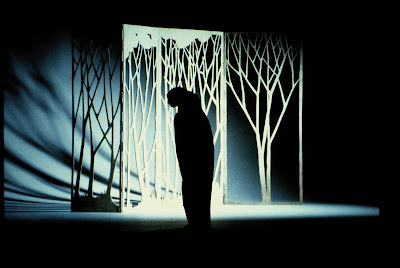 The two images below, demonstrating the importance of light, are my own kitchen-table mock-ups. I have wired up my copy of EGC’s cardboard lamp carrier with a torch bulb to illuminate the Player King and Queen, and used a perforated something to create the mackerel sky effect. 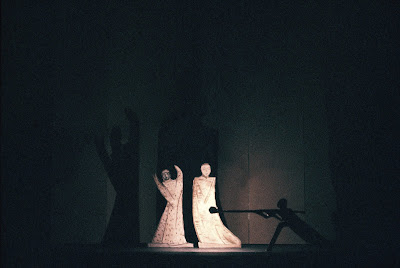 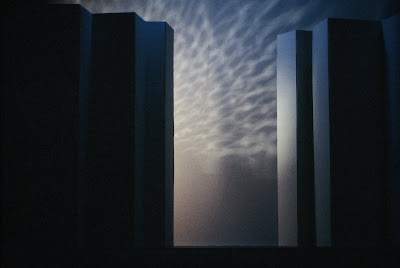