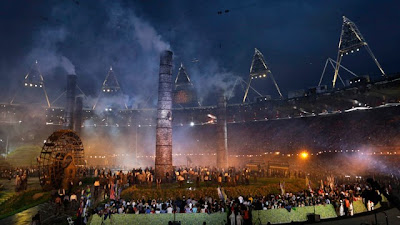 Prometheus was punished, and indeed all of mankind, for Zeus sent Pandora with her box of evils to compensate the advantages of fire; but Zeus never took back the fire. … Still, the march of knowledge and technique continues, and with it the social and moral travail. No one can be sure that mankind will survive this painful course, especially in an age when man’s knowledge of nature has far outstripped his knowledge of himself. Yet we can be sure that man will take this road and not forsake it; for although he has his fears, he also has eternal hope. This, it will be remembered, was the last item in Pandora’s box of gifts. David Landes, The Unbound Prometheus: Technological Change and Industrial Revolution in Western Europe from 1750 to the Present

This
photograph is the perfect coda to Friday night’s Olympic opening ceremony, which
featured huge smoking chimneys rising from the ground to symbolize the dark
satanic mills of the industrial revolution and our Promethean progress from pleasant pastures.
Here my
brother Bill (second from the left) and his teammates pose with a sports shield
in the playground of their elementary school, circa 1933, and in the appropriate setting of
working-class Bradford, complete with smoking mill chimney in the background. They
were, I suppose, beneficiaries of what Jacques Rogge praised in his ceremonial speech, namely Britain’s inclusion
of sport ‘as an educational tool in
the school curriculum’. 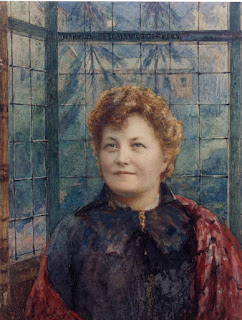 In
fact the person responsible for introducing P.E. into the school curriculum was
Swedish-born Martina Bergman-Österberg, who in 1885
established the first physical training college in England, in none other than
West Hampstead. A significant campaigner for women’s suffrage and emancipation, she
is also credited with the introduction of the gymslip as female athletic wear,
releasing women from the constraints of the corset, and for introducing a
prototype of netball to England – first played in West Hampstead!
The
house in which she lived and founded the college was called ‘Reremonde’ and
still sits proudly on the corner of Broadhurst Gardens, now sporting a blue
plaque and part of the architectural and cultural melting pot that is modern
West Hampstead. 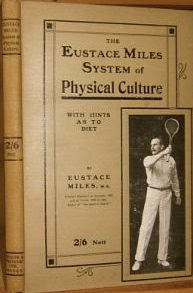 Another
former West Hampsteadite of sporting distinction has an unusual place in Olympic history and indeed the women’s suffrage movement. Eustace Miles, who
was born at West End House, won a silver medal in real tennis at the 1908 London Olympics, the only time jeu de paume was an Olympic medal event.
A man
of eclectic talents and interests, he was an advocate of vegetarianism, or as
he called it ‘fleshless food’, and with his wife started the Eustace Miles
Restaurant in Chandos Road, near Charing Cross Station. So famous was the
restaurant that it was referred to (and parodied) in E. M. Fortser’s
Howards End (‘It’s all proteids and body-buildings, and people come up to
you and beg your pardon, but you have such a beautiful aura.’) It was also a favourite meeting place for
the women’s suffrage movement and breakfasts were often held there to celebrate
the release of suffragette prisoners from Holloway.
I
close my short homage to the Olympic spirit and its local resonances, past and
present, with my ‘Cultural Olympiad’ trophies from the early 1950s with their depiction of Nike, winged goddess of Victory, together with our very own new season’s
West Hampstead grapes in praise of the Greek god Dionysus.
I was awarded these shields for performances given in the little custom-built theatre constructed
for the workers in Lister’s Mill in Bradford, dominated by its soaring chimney.
This is a picture of the mill before it was salvaged from dereliction and converted into luxury flats.
And here is an architectural detail I photographed in the last five years, after the restoration and clean-up. Dark and
satanic it may have been, but it was also classical or at least Renaissance in
style!

A reprise of my iPad recreation of my childhood vision of a magical sunset over West Bowling. I painted it with my Brushes app this time last year whilst preoccupied with another legacy of the ancient Greeks, Sophocles’ Antigone.

One thought on “OLYMPIC RESONANCES”