This week I want to take you to a very precise and, at the moment, highly sought-after spot in London, surrounded by pink plasterwork inside a building that seems to be posing as a cake, iced ambitiously by a master confectioner with theatrical aspirations. I had managed to procure H20, the end seat on the left facing the stage, halfway back in the stalls of the Apollo Theatre on Shaftesbury Avenue. The theatre holds just under 800 people, some of them in the third tier above us, reputed to be the steepest gallery in the West End, and that’s saying something.

The elderly lady next to me was reading the programme note, an excerpt from the book Real England: The Battle Against the Bland by Paul Kingsnorth. A girl dressed as a fairy with wings walked onto the stage before the front cloth and began to sing the hymn ‘Jerusalem’ in an artless voice. My neighbour in Row H put her programme in her bag and closed the substantial zip, with no concession to the delicacy of the moment, and checked the time on her wristwatch.

The last time I saw a fairy open a show was at my first pantomime in 1943 and I couldn’t understand then why all the other children seemed to be chattering as the glittering spotlit lady in ballet shoes addressed us in rhyming couplets underscored by the tremolo of the violins. Why weren’t they listening? What could they have to talk about? Clearly, some of them have grown up to own zip handbags and watches.

When the opulent curtain of the Bradford Alhambra rose in the severe winter of 1943/4, it revealed the quintessential first scene of the English pantomime, the ladies of the chorus, some showing a lot of leg as ‘boys’, dancing on the village green. I can see it now from my vantage point in the steep gallery: Olde England, Merrie England, epitomized by the painted thatched rural village and the chorus girls ring-o’roses choreography, which might have struck me as a touch perfunctory even at that tender age.

When Ultz’s (the designer’s) front cloth, emblazoned with the cross of St George, rose on Friday night at the Apollo, it was on a rural English night scene of a real caravan amongst very realistic trees, seen in strobe lighting, with a rave-up in progress to the accompaniment of what, in my innocence, I would describe as hard rock at a volume you could feel in your breast bone. Next, in daylight, Mark Rylance started his ‘morning after’ by executing a handstand on the sides of a water trough, the better to give his head a reviving dunk, and breaking an egg into a beaker of milk; that, and a freshly rolled joint, was his breakfast. I forget precisely the first words he spoke, but they presumably do not feature in English pantomimes. 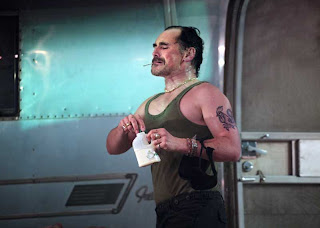 Now I take us back to 1983 and another precise spot in London, reputed to be below sea level, a small concrete-walled rehearsal room in the bowels of the Barbican. The RSC is rehearsing Peter Pan there, with Mark as Peter. I am playing the Storyteller, J. M. Barrie really, a part cobbled together from the storybook version and the witty stage directions included in the published version of the play to make it come alive for readers. It is that in-between time when every single prop and stick of furniture has been taken out of the room. The stage is being prepared for the technical rehearsals and there is nowhere for the actors to be, except that John Caird, who is directing the revival, suggests that we should do a last rehearsal on our own – without him or stage management, or beds in the nursery, Tinkerbell’s firefly, a crocodile skin, or even the most basic props of rehearsal, simply under the stare of the fluorescent lighting in the bare room.

We all watched one another and a better performance of Peter Pan I cannot imagine; Peter and the children flew without their feet ever leaving the ground, and Never Never Land in all its colour was there in that grim basement.

We had one more rehearsal in that room, a speed run – a favourite with some directors – when the play is rushed through at breakneck pace, but, in this case, in the second act, everyone had to do the lines, still at top speed, in a different characterization whenever a whistle blew. Mark was consummate at this exercise and when I ask myself if the perfect Peter Pan or the exquisite Richard II can possibly have had anywhere in them the seeds of his drug-dealing ‘gypo’, Rooster Byron, in Jez Butterworth’s Jerusalem, I answer no; but he was there in embryo several times at that crazy speed run.

After the interval the lady with the zip bag had gone. By then I had bought my own programme and noted the pretty drawings of hyacinthoides and Allium next to the paragraph from Kingsnorth’s book. There were no illustrations of cannabis or coca leaves. The programme note I’ve referred to described the English as being ‘strangely quiet about their deep past.’ Did I catch the elegant, eloquent Mark saying in a TV interview that they had found Kingsnorth’s book very helpful, and also that Rooster is not a particularly destructive influence on the young people who visit him in his Dionysian domain?

I have booked a box for three so that my wife, younger son and his girlfriend can see this play, wonderfully acted by everyone, compulsory viewing for anyone not too attached to zips and the time. But I thank God that my nearest and dearest haven’t yet escaped the blandness of modern English life by befriending a real-life Rooster, unless, of course, they are being strangely quiet about their deep present!