I pace upon the battlements and stare
On the foundations of a house, or where
Tree, like a sooty finger, starts from the earth;
And send imagination forth
Under the day’s declining beam, and call
Images and memories
From ruin or from ancient trees,
For I would ask a question of them all.

W. B. Yeats,  The Tower (1928)
I have had some personalized greeting cards printed very reasonably by Snappy Snaps and featuring my two finished portraits of my neighbour, Captain Cox. 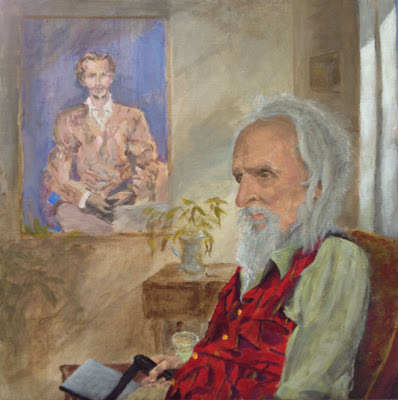 My local branch’s printer was out of order so I went three Tube stops south to St John’s Wood, the same firm and design of shop but in a street from another world, a world which seems to ooze money. As I browsed about the high street, the confusion of languages was even richer than in my local high street, which is a good thing if one reads what God thought of the single language of the Tower of Babel. Well-dressed young families were easing themselves in and out of large expensive cars. The houses advertised in the estate agents’ windows were of an elegantly earlier period and at least three-and-a-half times as expensive as their West Hampstead counterparts. The cards I’d ordered were the same price as my more local shop but at a nearby gents outfitters there was a pair of quite ordinary jeans in the window, sale price £199 reduced from £285.
I noticed an Oxfam charity shop across the road, hemmed in between the boutiques, and sure enough the window display was up market, too, tastefully minimalist with some choice books, a nice mirror and a classy gilt ladies’ evening bag. Out of curiosity I went inside, with a minute to closing time, to price the jeans if they had any, and to my astonishment actually bought a nice pair for £10.99! On the price tag there was a photograph of a smiling little boy clutching a goat and the words: ‘£10.99 buys a milk goat for a home for street children in Tanzania.’
Soon I re-encountered a lady who’d been in Snappy Snaps yesterday when I had discovered she’d been a BBC radio producer; even so she was as ignorant of my illustrious radio past as I was of hers. This afternoon, as the rain had stopped, we sat down at a street café and chatted for a while and she told me about her absorption in Buddhism and the grand masters she had been fortunate enough to know and how the ‘reality’ around us was merely a dream.
Now it so happens that I had been reading about the Buddha in H. G. Wells’s Short History of the World whilst commuting to Windsor last week and had been rather shocked to learn that he (the man who became known as the Buddha) had crept out of his home in the night and left his sleeping wife and newly born son so that he would be free to live and seek enlightenment. The rest is history as the saying goes, except one wonders about the untold history of the wife and fatherless child.

I would like to be able to make a decent essay out of these and other of the week’s happenings – I have, after all, been listening to the father of essayists (and indeed the first ‘blogger’), Montaigne, on Radio 3 this week – but it is late and I will leave these snippets hovering with the addition of one more. I saw our Mayor of London, Boris Johnson, claim that Anish Kapoor’s Olympic Orbit tower was ‘much more unique, more complex, more interesting than the Eiffel Tower.’ Kapoor’s Orbit bears a striking resemblance to the Soviet artist Vladimir Tatlin’s Constructivist Tower (or Monument to the Third International). It too was based on the Tower of Babel and was intended to eclipse the Eiffel Tower in height and as a symbol of modernity, though it was never built.

Comparative towers, the price of houses, of jeans and milk goats … and I’m not dreaming!

Postscript
On the subject of towers and their ‘local’ associations, this watercolour of St Aldate’s in Oxford and the famous Tom Tower of Christ Church College was painted in 1896 by Fritz Althaus, who lived in Iverson Road, West Hampstead. 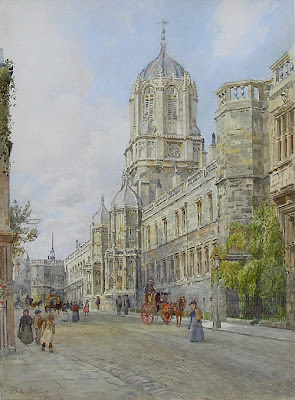 The Tower, whose bell ‘Great Tom’ still tolls 101 times each evening at 9.05, was also for three years the central view from Kathleen’s window in Oxford.

The good news is that the waist of the jeans is slightly loose on me.

One thought on “ORBITING BABEL”