It is meat and drink to me to see a clown.
Touchstone, As You Like It, Act V, sc.i
There is rather a lot to contend with on my revamped website.* But in case anyone would like some light reading, this week’s blog features an outtake from the manuscript of my book Slim Chances. I have seen an amazing span of theatre in the last fortnight, much of it proving that the realistic well-made play of then and indeed now is very much alive.
Some years ago, after a visit to a circus at Camden’s Roundhouse, I wrote:
I know that I saw something essential last night. It dispelled all tired, heartless, conventionalized routine, neither was there the faintest whiff of the pretentious, technically inadequate aspirations of so much theatrical experimentation, which hopes to tap the roots of Essential Theatre. 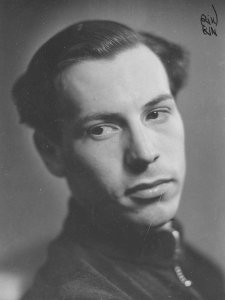 Watching the hair-raising results of what must be a prodigious dedication, I kept on being reminded of a movement teacher at the National Theatre in the 1960s, Yat Malmgren, who once said during a class, ‘If you were performers in a circus, you’d kill yourselves every night.’
Last night, had we realized it, the avenging angels and wrathful gods of the United Nations, with deadly computerized precision, were aiming cruise missiles at the Serb positions around Sarajevo. High up beneath the Roundhouse roof, with wonderful precision, time after impossible time, the trapeze artists would swing and hurtle and revolve in uncountable somersaults. Then the dreadful drop and four hands would find one another in the air, two saving and two, belonging to a falling angel, saved. Landing back on their perches, they would look down on us and shout their triumph, smiling and happy.
Lower down, two frizzy-haired women defied gravity by grasping each other in unheard-of interlocking embrace, like a living chain-link puzzle. And the bicycle was ridden, like a leaping, prancing gazelle, and bounced off a trampoline by crazed genius, who clearly lives with it and has never been seen on any other form of transport.
The clown tried to net a butterfly, make spots disappear from a handkerchief, and displayed his shy cunning whilst wondering at us and the world. Finally, reading from a picture book to his inattentive baby, he manifest the truth of James Agate’s proposition that ‘puppetry is the point at which all schools [of acting] converge.’
The circus comes to town in many guises. Allow me to quote again Harold Hobson’s comment in 1950:

The span of time between The Second Mrs Tanqueray and The Winslow Boy is theatrically speaking enormous. Our characteristic contemporary drama is in its extreme old age. In its prime its vitality depended on the excitement caused by the new method of realism, which for the first time in many decades made stage characters talk, walk, speak, dress, behave and think like ordinary human beings.

Well its vitality survives, not least because ordinary human beings are so extraordinary. Sure, we dance and sing and mime them more than we did, but we have learnt to listen to nuclear physicists on a West End stage, after reading a crash course in quantum theory in the programme, learnt too that box sets can accommodate low-life vagrants who hold the mirror up to our nature. We have wept at puppet horses whilst their pragmatic puppeteers were plainly, ordinarily in view, and tussled with politicians and bankers. As I write, Coward and Rattigan beguile astonished young critics with their freshness. Old age? Well it is, after all, the oldest profession, ‘Let’s Pretend’.
************ 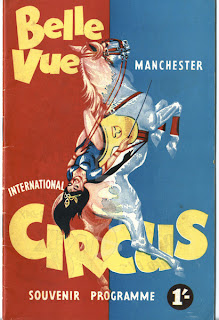 The first impressive clown I remember seeing was Popov of the Moscow State Circus, who in 1956, in the vast Belle Vue arena in Manchester, seemed single-handedly to thaw the Cold War – he was the first Soviet clown to perform in the Western world. Our Northern Theatre School class was taken on a special trip.
The slack wire must be infinitely more difficult to work on than the tightrope, especially if your act depends on looking as if you are in constant danger of falling off or getting clothes entangled. But the great moment was when he suddenly spoke just three words, an English North Country exclamation, in a voice we all heard: ‘Ee by gum!’ No doubt in London it was ‘Cor, blimey!’ 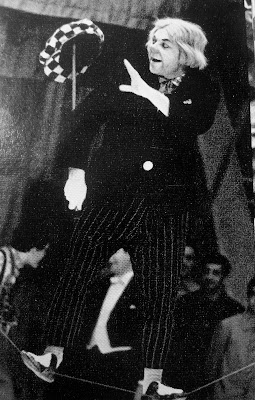 My favourite story, my Muscovite readers will be interested to know, concerns one of the workers’ clubs in Kutuzovskaya Street. At the age of eighteen, Oleg Popov was called into the director’s office of the Moscow Circus School and told he should go and see a clown at the Metro Builders’ Club in Kutuzovskaya Street, the director having seen ‘a young clown who was very like you only better.’
‘I can’t go and see him’, said Popov.
‘And why not?’
‘Because it’s me’, he replied.
* Two brand new additions to the website: a Newman Noggs video compilation and another rare excerpt from Bill Naughton’s 1963 radio play, November Day. And over on YouTube you can watch two scenes from R. C. Sherriff’s Journey’s End, filmed for television in 1988.
Click here to cancel reply.