In response to your charming comments about Bean, I open with a picture of her relaxing between diplomatic missions: 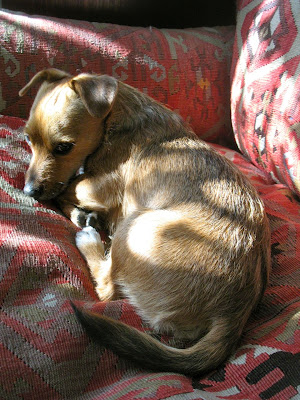 ************
I can see the Pope chain-smoking now. Are you old enough to remember? I am, though I never actually saw the play, way back in 1968. It was called Hadrian VII and had been adapted by Peter Luke from Frederick Rolfe’s novel of 1904. The hero is a failed candidate for the Roman Catholic priesthood, a chain-smoking Englishman living alone and in obscurity with his cat. Somehow he is elected to the Papacy and forces through astonishing reforms. It was funny enough and serious enough for an Anglican canon I knew (John Taylor, later Bishop of Winchester) to arrange to buy out a performance at the Mermaid, a special matinée for that year’s Lambeth Conference. Alec McCowen, who scored a huge hit in the lead, received the Archbishop of Canterbury, Dr Michael Ramsey, in his dressing room and said the play had never gone better. Pathé News recorded the event: 300 bishops sitting attentively in the auditorium and, afterwards, the Archbishop and the Apostolic Delegate warmly greeting the cast.
A far more remarkable coup de théâtre and de politique will take place this coming Thursday. The Great Game: Afghanistan – a dozen half-hour plays commissioned by Nicolas Kent and produced in three parts at that jewel of a fringe theatre, the Tricycle, in London NW6 – will be performed to a military audience including General Sir David Richards, former commander of the international forces in Afghanistan and our next Chief of the Defence Staff. I have seen two of the three evenings (though you can occasionally see the ‘trilogy’ in one day) and am looking forward to the third on Monday. But I am sure Thursday is going to be THE occasion as the military watch vivid dramatizations of our first involvement in Afghanistan under Queen Victoria, and just some of the teeming complexities, as portrayed by thirteen playwrights, of Afghan history up to the present: the Soviets, there by ‘invitation’ to liberate the country, women in Kabul wearing Soviet-issued miniskirts, the Taliban, NATO and NGOs. General Sir David Richards himself is the protagonist of one play. Yes, I will be there on Monday night for Part 3! 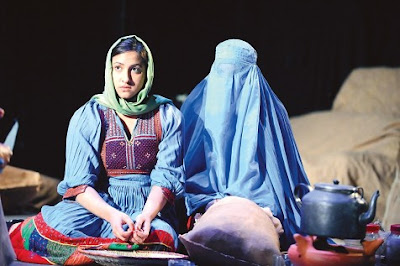 The Great Game. Photo by Tristram Kenton
Talking of things coming in threes, last Thursday I went to the press night of Danton’s Death at the National Theatre, Georg Büchner’s play about the French Revolution, which has been done twice before at the National – by Jonathan Miller in 1971 and by Peter Gill in 1982. I have now seen all three productions, having had friends or colleagues in the cast on each occasion. I found the experience eerily bloodless each time, despite the current full-blooded Danton of Toby Stephens. Anyway, for the record, The Sunday Times awards this latest production of the German warhorse five stars.
From a learned review of Jonathan Miller’s production, I quote part of a letter Büchner wrote:

I find in human nature a horrible uniformity. . . . The individual is foam on the wave, greatness is nothing but chance, the dominance of genius a puppet play, an absurd struggle against an iron law. The greatest of us can only recognize it: to control it is impossible. [Danton is one of the great; he recognizes the futility of his struggle, and is] crushed to nothing under the terrible determinism of history.

Froth is too light a word for Büchner’s heavy individualism. As for his message that our best efforts are a puppet play, this was symbolized in Miller’s production, ‘indelibly’ I read (though I can’t for the life of me remember it), by a series of dolls and mannequins, some headless and appearing sinisterly in boxes throughout the action. Perhaps this dismal view of humanity as mere puppets accounts for my overwhelming sense, at all three productions, that I was witnessing dead wood. Conversely, some of the best, most moving performances I have seen have been given by puppets: splendid representations of the human spirit. I am thinking of the Bunraku puppets of Japan, Lotte Reiniger’s first silhouette film, The Adventures of Prince Achmed, and, dare I mention, the latest Toy Story movie which I understand makes adults weep. James Agate once wrote: ‘Punch and Judy have no understanding, yet their show is the most complete illusion of life’ (and certainly no more exaggerated or bizarre than the Picasso portraits I saw the other day). ‘Puppetry’, he said, ‘is the first and all but the last word in acting: it is the point at which all schools converge.’
Incidentally, I have in one of my books a rare photograph of Henry Irving as Robespierre (Danton’s political rival) in his Lyceum staging of Sardou’s melodrama in 1899. 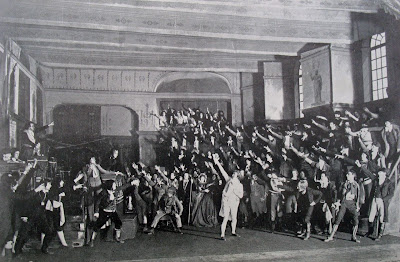 So in a busy week spent trying to apply the final polish to my book and attempting a charcoal portrait, I saw not only the guillotine on the South Bank, Kabul in Kilburn High Road, chunks of Afghan wars and revolutions, but also evidence of Picasso’s revolutionary paintings at the Gagosian Gallery, the astonishingly immaculate addition to the Kings Cross area.
O God! that one might read the book of fate,
And see the revolution of the times.
(Henry IV, Part 2, III.i)

Postscript: The Cost of the Information Revolution
A piece of street art I caught sight of on my way home from the Gagosian Gallery was a curious amalgam of Disney and Picasso. The extraordinary image, which I photographed, was on a high chimney stack. I had planned to show it to you but have momentarily mislaid the device that allows me to transpose images from my memory card to my laptop. Meanwhile, just this morning, I heard on the radio that the average email uses the same amount of power as that used to boil seventeen kettles. Should I keep my blogs shorter, I wonder, in the interests of energy conservation, and when I find my device, should I dare post the photo?