POSTCARDS TO THE BARD

Bright baffling Soul, least capturable of themes,
Thou, who display’dst a life of common-place,
Leaving no intimate word or personal trace
Of high design outside the artistry
Of thy penned dreams,
Still shalt remain at heart unread eternally.

London is decidedly chilly; I remember last year I photographed our bust of Shakespeare near our lilac blossom for his birthday, but I fear it won’t be fully out by Monday.

I can’t quite believe I managed this idealized Bard Birthday ‘painting’ last year, using my index finger and the Brushes app on my iPhone. 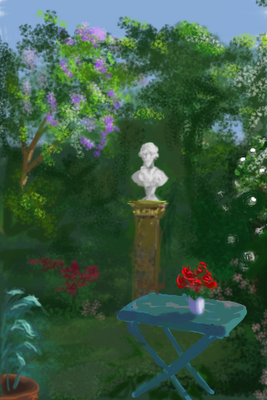 I have taken fright lately about working on the iPad and iPhone, though I did manage an abstract not long ago and what could represent an enchanted Forest of Arden. 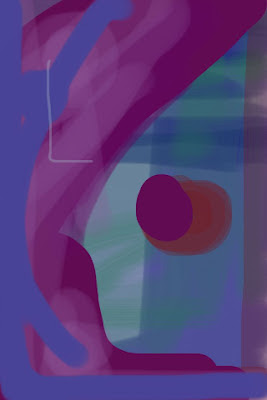 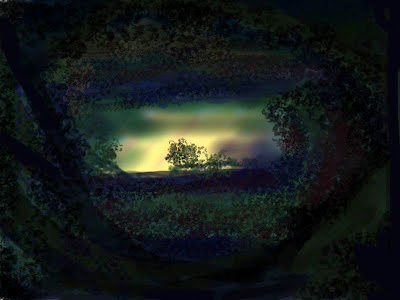 This last week I went to Large Glass, an art gallery in the Caledonian Road, to hear A.L. Kennedy (author of The Blue Book) talking about her postcards (the gallery has currently a fascinating exhibition of postcards and has, since February, been running a series of related talks). Alison managed to give us a potted history of her life. None of her own postcards, projected on a screen, were specially memorable, and I suspect she could have given an equally engrossing talk with a random collection of objects – a pair of shoes, an old note book, a favourite pen – doing a riff on each.
Stratford-upon-Avon was introduced via what she admitted was the most ordinary postcard view, but what she said about it was touchingly personal. Her first taste of professionally performed Shakespeare was in the intimacy of the Other Place, the original tin hut of blessed memory. I would like to read a transcript of the talk (it may have been recorded); I won’t attempt to paraphrase her words, but it was the power of Shakespeare’s words, their sound that thrilled the young girl down from Dundee. At first she was surprised to be in a shabby hut and not a ‘proper theatre’, then the RSC’s big guns came on: Richard Pascoe, Alan Howard et al.
She loved the vast reaches of the main theatre too and spoke particularly of its smell and lamented its radical rebuild. In fact, on a recent visit they were actually in the process of gutting the building and her wry threnody of the familiar smell drifting along waterside mingled with the building’s dust is something I will not forget.
Mind you, for all one’s fond memories, it was a dreadful mammoth Odeon of a place and the back rows of the gallery seemed miles away. I remember the Head of Voice, Cis Berry, getting the company to spread so that we were dotted about all over the stage and the empty auditorium, speaking the Bard to one another over the wastes of empty plush in fervent attempts to colonize the territory with an amalgam of projected clarity and intimacy.
Speaking of postcards, we have this framed one of Emily as the Princess of France in Love’s Labour’s Lost, bought from the front-of-house shop at Stratford. (It was during the run of Love’s Labour’s Lost that our daughter Dora was christened in the very church in which Shakespeare was baptised and buried – the church seen in A.L. Kennedy’s postcard above.) 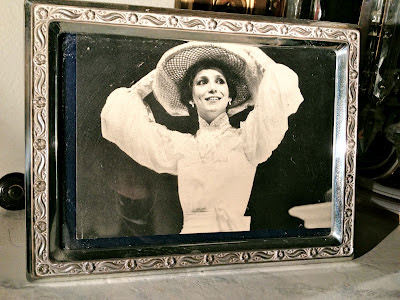 The last written words I will give to Frank Benson, as famous for his cricket teams as for his Shakespeare. Even in this night-scented hymn to Stratford and the Bard, he manages a reference to the town’s playing field.

But perhaps the last spoken words should be the Bard’s.
Postscript
At 7.45 this Sunday evening (UK time) on Radio 3 you can hear A.L. Kennedy’s documentary Art and Madness, to which Edward contributed. The programme runs for forty-five minutes and ‘questions the clichéd link between madness and creativity’. For those of you in other time zones, you can still listen in via the Radio 3 homepage.
KR
Click here to cancel reply.