First a little test: can you match the lines with the titles of the plays in which they are spoken?

1. The boy is plainly innocent. I accept the brief.

3. Look at this in a new way and a hidden pattern emerges which connects the two sides of the equation in the most extraordinarily beautiful way.

5. You’ll see me then, at last, with other people’s eyes; you’ll see me just as your daughter does now, as all wholesome folks see women like me.

6. Given the existence as uttered forth in the public works of Puncher and Wattmann …

a) Who’s Afraid of Virginia Woolf?

b) The Dance of Death

g) The Goat, or Who is Sylvia?

Answers printed here for easy reference. It’s up to you whether you read the blog before deciding on your answers and checking them against this list.

__________________________________________
Albert Einstein, we’re told, observed ruefully that he was alone amongst his friends in not entering a competition set in 1920 by the journal Scientific American, which offered a cash prize of $5,000 for the most cogent summary of his Special Theory of Relativity in no more than three thousand words – ‘so that a person with no special mathematical training may read it profitably.’* ‘Do you know,’ said Einstein, ‘I don’t believe I could do it.’ 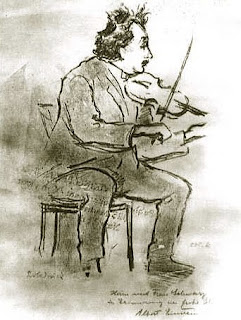 The great mathematician and physicist used to play in a string quartet at Princeton University. Another member of the group when asked, ‘What’s Einstein like as a musician?’, replied, ‘OK. The only thing is – he can’t count.’
Lithograph by Emil Orlik, 1928

I have set myself the task of writing an introduction to my book in as near 1,500 words as possible. It attempts an overview, a cogent summary of the theatre as I have known it – ‘Theatre in My Lifetime’ sounds a bit pompous I know. (Is it even arguable that the developments in theatre have been as important as Einstein’s theory?) Crazy perhaps all the same to attempt to summarize even the chunk of theatre I know about first hand in a short chapter. However, one peg to hang things on is what the critic Harold Hobson wrote in 1950, lamenting the dearth of new playwrights:
The span of time between The Second Mrs Tanqueray and The Winslow Boy is theatrically speaking enormous. Our characteristic contemporary drama is in its extreme old age. In its prime its vitality depended on the excitement caused by the new method of realism, which for the first time in many decades made stage characters talk, walk, speak, dress, behave and think like ordinary human beings. 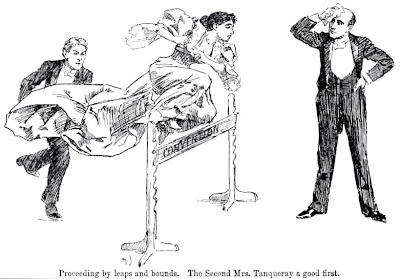 Punch cartoon showing Mrs Patrick Campbell (the second Mrs Tanqueray) leaping the Hurdle of Convention. Arthur Wing Pinero stands mopping his brow.
Published 10 June 1893.
When Beckett’s tramps waited for Godot in the London of 1955, Harold Hobson welcomed them and wrote about them for seven successive weeks; was it because the revolution in playwriting had been accomplished in the old ‘method of realism’ by characters who talked, walked, spoke, dressed, behaved and thought like ordinary human beings? I would argue yes – except we had not seen this particular class of ordinary human being behaving anything like this on the stage before. 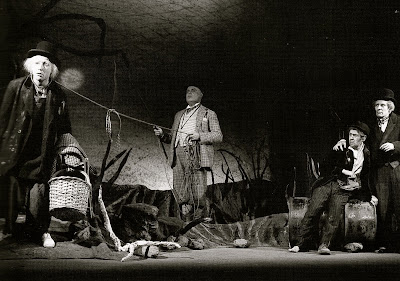 Waiting for Godot at the Arts Theatre, London, 1955.
(V&A Picture Library)
I remember that first line ‘What a dump!’ in Edward Albee’s Who’s Afraid of Virginia Woolf? One knew of course, surely everyone knew, either from observation or personal experience, that marriage could be corrosive (Strindberg had written of a corrosive marriage in his play The Dance of Death in 1900). But somehow we had not been permitted to know it, witness it so idiomatically as this, in the very vernacular of our own lives, and in a dramatic entertainment in public. We were learning, publicly, just how extraordinary our ordinary lives could be. 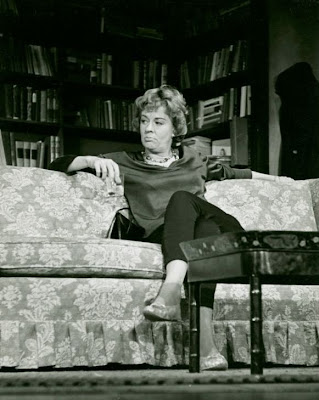 Uta Hagen in Who’s Afraid of Virginia Woolf?
(Billy Rose Theatre Collection)
To parody Hobson, the span of time between Who’s Afraid of Virginia Woolf? in 1962 and Albee’s 2002 play The Goat, or Who is Sylvia? is enormous, but it is not a span that suggests our school of drama is in its extreme old age – unless with age has come wisdom. The play reads, even on a bus, like music and one can ‘see’ the action. It deals with a taboo subject with a light comic touch of breathtaking realism and segues effortlessly from domestic comedy to tragedy of Greek dimensions.
You may wonder how one gets back to Einstein from here. Well on Saturday night I saw a play about mathematics, Complicite’s A Disappearing Number. It’s about an Indian genius of maths called Srinivasa Ramanujan and his close collaboration with Cambridge don G. H. Hardy around the time of the First World War. On one, if not most levels, I am no wiser. I still have to face the fact that the little we know about our physical universe is a closed book to me since it can only be understood in terms of mathematics. And yet the play fascinates, partly because of cunning, fluid and imaginative staging, and partly because mathematical geniuses sometimes think, and occasionally talk, but certainly walk, dress and behave like ordinary human beings – like you and me. 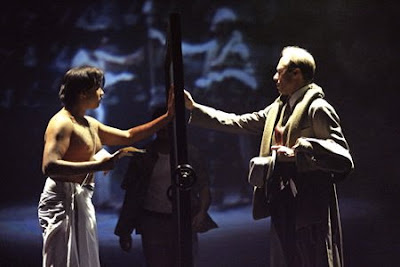 Shane Shambhu as Ramanujan and David Annan as Hardy in A Disappearing Number.
Photo by Tristram Kenton.
Taking the play to Hyderabad for the 2010 International Congress of Mathematics was perhaps not quite the coup that luring our military top brass to Kilburn to see twelve plays about Afghanistan in one day was, but the span of time and space covered by these two events, let alone by the total of seven plays I have mentioned, is – as Hobson might put it – ‘theatrically speaking enormous’, and might go on, who knows, like a run of numbers to infinity. But that is already over 750 words and I have said little about the experience thus far of a theatrical lifetime; have only touched the tip of the theatrical iceberg; no, that’s the wrong metaphor – I need an elegant solution, some sort of equation.
______________________________________
Speaking of the quest for brevity and cogency, Harry Graham’s poem of 1909, ‘Poetical Economy’, includes this verse:
If playwrights would but thus dimin.
The length of time each drama takes,
(The Second Mrs. Tanq. by Pin.
or even Ham., by Shakes.)
We could maintain a watchful att.
When at a Mat. on Wed. or Sat.
* The winner of the Eugene Higgins $5,000 Prize was an Englishman by the name of Lyndon Bolton, a senior examiner at the British Patent Office, London. You can read his essay here and judge for yourselves the lucidity of his summary.

One thought on “QUANTUM LEAPS AND BOUNDS”