‘They’ would rather I did not divulge any news of the part I have landed until the project has been officially launched. However, having, since the launch of my Weekly Post, promised a glimpse of my painting in progress, ‘Sophie and the Unicorn’, I thought it fitting this Sunday to compose two blogs, a double bill, as it were; the second offers a sneak preview of a little anthology I’m preparing to commemorate our production of Artist Descending a Staircase, including two details of the painting at different stages in its development.

Two rare events for me this week involved commerce and art. I was engaged to do a commercial voice-over (a corporate in-house job, so you won’t hear it) and found myself walking to a studio through Soho just after nine on Thursday morning. At that time the Windmill Theatre, now a table-dancing club, is firmly closed – and somehow forlorn, as are the ‘specialist’ bookshops and the locked doorways whose stairwells are not yet revealing their handwritten ‘Model 3rd Floor’ notices. Fresh and Wild is showing signs of life, but that is a classy organic food emporium, and there is a heavily railinged Victorian elementary school nearby, always thronged by inner-city children when I used to pass it on my way to perform matinees of The Woman in White at the Palace.

There is any number of casting suites, not with couches, but lines of plastic chairs where actors, more distinguished than you might think, sit and wait their turn to be filmed going through their paces with freshly learnt ‘sides’ in small white rooms, return home and, as like as not, hear no more.

The ‘real’ world is further represented by a small builders’ merchant with a window display of brass door fittings and tools.

My younger son held down a demanding and stimulating job for a year at a voice-over agency on an airy top floor within sight of the tops of the plane trees in Soho Square. One day, out of the windows, he saw some tree surgeons amongst the foliage in St Anne’s churchyard. That changed everything and today he is out, felling a sick tree in Islington, and will soon be starting a course in arboreal craftsmanship.

Voice-over studios are swish places; their foyers have deep leather sofas or Bauhaus stainless-steel chairs, chic framed posters, selections of the day’s papers, coffee, croissants, muesli and fresh fruit. The voice booths are equipped with bottled water, tissues, smart containers sprouting sharpened pencils, and a microphone sensitive to the most intimate nuance. Through the glass is a highly practised technician on an awesome sound deck and up to three or four people to monitor the choices of interpretation one offers. The high-tech equipment will pick up the slightest hint of insincerity or phoniness in one’s rendering of, perhaps, less than a dozen words, and it occurred to me that, proportionately, I could have done with the same amount of rehearsal of my lines in Stoppard’s sparkling script of Artist Descending as I got the other morning for the voice-over.

My wife Emily tells me that when she was in Charley’s Aunt with Tom Courtenay at the Apollo on Shaftesbury Avenue in the early 70s, she didn’t appear until the second act, so on Wednesday nights used to go and spend an hour in an adult lace-making class at the elementary school round the corner.

I recorded my voice-over by 9.50 (having started at 9.30), strolled to Piccadilly and, by five past ten, was entering the forecourt of the Royal Academy. Inside, the Van Gogh exhibition was already crowded.  I found his early drawings of peasants, when he was teaching himself to draw, very impressive and skilful, and earthy as he wanted them to be. His mature paintings have an increasing sense of movement and rhythm in the way that he applies the paint like so many waves.I bought Emile Zola’s novel The Masterpiece to read and the Tube journey home flew by.

Went out in the evening to catch the Tube again, being careful to take Zola in the pocket of my best overcoat which I can’t have worn for ten years. I had been invited to attend a reception in the Peers’ Dining Room at the House of Lords: this was the Liberal Democrats embracing the Arts. It turned out that the candidate for my district had put me on a list, hence the gilt-edged invitation, leading inevitably to having one’s underpants checked for explosives after a long wait in the cold. Politics apart, I wanted to see the Peers’ Dining Room.

Nick Clegg spoke and quoted from Maynard Keynes’s description of the purpose of the Arts Council: ‘The artist and the public can each sustain and live on the other in that union which has occasionally existed in the past in the great ages of a communal civilized life.’ Only occasionally: Van Gogh hardly sold a painting in his lifetime.

The last time but one I was at the Royal Academy it was to see the Anish Kapoor exhibition with its tons of red wax, some of it shot from a cannon, and baked concrete. I was impressed by how much the brochure offered by way of elucidation, even quoting the artist, although he, at one point, says, ‘I have nothing to say about art.’ 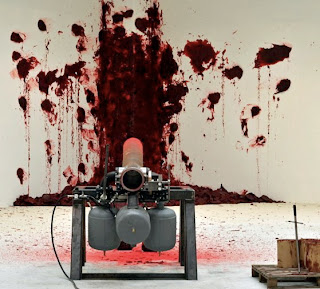 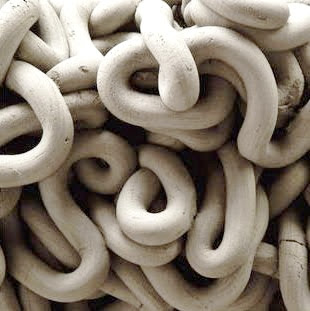 I wrote a verse about the experience:

The Richer for Kapoor?
(With thanks to the RA’s explanatory brochure)
Tautologically speaking, deliberately mincing my words,
A scatologist’s ‘stuffness’ obsession displays an abundance of turds
‘The resulting objects challenge traditional notions of form’
So states the loquacious gloss brochure,
Devoured by the patrons who swarm
Round the rooms of the Royal Academy
A sell out in more ways than one
To see this cement in abundance
This ‘hyper-material’ dung
A computer-controlled 3D printer
‘Excreted’ these ‘preordained’ forms
Well, if nature abhors a vacuum
Art must, perforce, abhor norms.
Impossible, now, the satirical
In the face of empirical facts
The critics have mostly waxed lyrical
Canonized the tons of red wax.
I crept round the piled ammunition
Curious to take a quick look
At the boy who had just ‘pulled the trigger’
He was sitting there, reading a book …
*************************
A Liberal believes in the raucous, unpredictable capacity of people.
(Nick Clegg MP in ‘The Power of Creativity’)

2 thoughts on “RARE GLIMPSES, I”