Nothing I have written, or can write now, seems adequate or even necessary by way of introduction to the intense, sparse poetry of this little masterpiece. It was an RSC production that played Stratford’s Other Place and the Pit at the Barbican and was included in the New York (BAM) and Washington season.

Subsequently it was taken on tour by a commercial management, playing an odd assortment of venues in far-flung places: Jerusalem, Tiberias, High Wycombe, Bath, Dublin, and Edinburgh, and the little Arts Theatre near Leicester Square where I had seen the original English production of Waiting for Godot while still a drama student. Royal was in the title of the Dublin venue (the Royal Hibernian Academy Downstairs) where I arranged for the production to be captured on video. It was a small, disused underground car park with grey concrete walls, ceiling and floor and grey dust, and an awkward arrangement of seating for a very small audience.

There was a single wooden batten on the concrete ceiling in quite the wrong place for us to suspend Krapp’s solitary light. When I declared that there was no alternative but to move the batten, the stage manager in her charming Dublin accent said gravely, ‘That would mean recourse to masonry nails.’ A line worthy of a Beckett character.

Here are two clips, from near the beginning and the end, of the Dublin performance:

And a couple of excerpts from my forthcoming book (to be published later this year):
This is a play about a man and his diary, the record of his life, literally recorded on a reel-to-reel tape recorder. In it the actor performs with a recording of himself – himself, the actor he trusts best in all the world; the actor whose criticism, if he is fortunate, is constructive, however harsh, and only seldom flattering. ‘Just been listening to that stupid bastard I took myself for thirty years ago’ are the words Krapp commits to a new tape after his first listening session. ‘Hard to believe I was ever as bad as that.’
After a 6 p.m. performance of Krapp at Stratford’s the Other Place in the summer of 1997, I found myself the centre of a small, informal meeting as I crossed through the café bar to go out and on to the main house for the evening performance of Hamlet. Just one or two people had waited to see me. An elderly gentleman – well, he might have been sixty-five – said, ‘I saw Waiting for Godot when it first came out and made nothing of it. I don’t know why I came today to see this play, but I enjoyed its spaces in between, the silences, the stillnesses. You see, then I had nothing to fill them with. Now I do.’
* * *
Every time I performed the play I learned to marvel at it the more. It defies categorization. It is an intellectual and elegiac vaudeville sketch for clown and tape recorder, a life’s history in fifty minutes, beginning with the hero slipping on a banana skin and ending as he looks into the abyss. It is a conjuring trick with stage and ‘real’ time – except that there is no trick. The time the solitary Krapp spends with us in the play is the actual time it takes to sigh and peer at his keys and search his table drawers for bananas, to read his logbook, to play and listen to a particular tape (‘Box … thrree … spool … five’), and begin to record another. But the sense of the distances between his present and his pasts, captured in the sound of his voice, evoked by the use of the stop-and-start, rewind and fast-forward buttons, so actual, so arbitrarily, sometimes violently controlling but giving rise to the surprising, disruptive power of his history as it intrudes into his current existence – all this gives the play its deep sense of perspective. 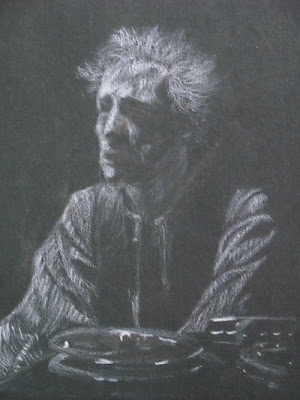 Krapp and His Last Tape. Self-portrait, 1997. Pastel on Card