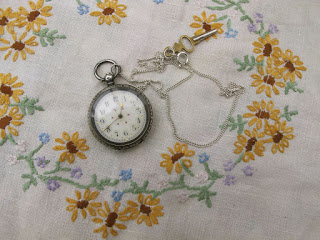 The footsteps are obliterated now; the face of the country may be changed; but the pillar is still there, to remind me how all things were when it was reared.

I have been regarding relics, de-cluttering.
I bethought myself that our daughter might want to keep the well-thumbed pack
of Happy Families so I rescued it from the recycling bin. Somebody had written
‘42 cards’ on the pack. I counted them up and there were only thirty-nine. Back
into recycling they went.
It can be a labour-intensive business. It
took me fully four minutes to fill in the form at the Oxfam charity shop so
they could make the best of my contribution, to say nothing of the time it had
taken to sort books and nick-knacks and carry the first of, I trust, many
weighty loads to the bus stop.
I have come across an old wristwatch without
hands, but it strikes me that the Iranian watch repairer down the road might
need the spare parts, at least the spring. He repaired a watch that belonged to
my mother by using the spring from another defunct timepiece. To my knowledge,
Mother’s watch had not told the time for at least seventy years, and now it
can, so I will ‘take the time’ to go down to the watch repairer in case I might
do a good someone else a good turn. Of course one needs to take more radical,
sweeping measures if one is to achieve anything in the de-cluttering line.
Talking of relics, last week I was in
Chichester Cathedral where there is a glass panel set into the paving of one of
the aisles and there, some four or five feet beneath, is a small section of
ancient Roman mosaic preserved for history’s sake.
As it happens I have come
across Roman-inspired relics of my own: a photograph of the ruins of Palmyra,
taken when I visited Syria some years ago. The theatre is most impressive; one
tries to envisage what a performance would have been like, and its audience, at
this important trading centre on the Silk Road.
This is a photograph of the young man who took
tourists round the ruins. He told me he was a Bedouin; I noted his stylishly
distressed jeans and new trainers. I have often thought of him along with so
many of the people I met on my trip. It is not only his livelihood that has
ended; the very existence of the ruins themselves is now under threat.

One thinks of the sedate calm of our cathedral cities where past cultures are proudly preserved for our pleasure within the very confines of the centre of worship. Chichester is famous, too, for its patronage of modern art as John Piper’s tapestry and Graham Sutherland’s altarpiece demonstrate.

At the first night of the new Glyndebourne season last Thursday there was no sign of anything like this magnificent portrayal of Ancient Rome, as might have greeted the first audience of Donizetti’s Poliuto in Naples in 1848. 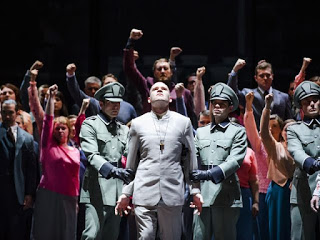 The logo on the website prepared us for something distinctly of our time though the set design demonstrated how Edward Gordon Craig’s radical ideas in the first decade of the 20th century are still current. Craig as a visionary was no engineer nor was the Moscow Art Theatre able to realize his dream of moving screens suggesting pillars – the scenery, part of the fluid action – so his scene changes had to be effected behind closed curtains.

The menace of Julia Hansen’s massive moving walls would have caused Craig to cry of stolen ideas, but he would have envied the engineering. Craig might have allowed a glimpse of sky at some point which we were denied but there were accessional brief projections to ‘paint the scene’. 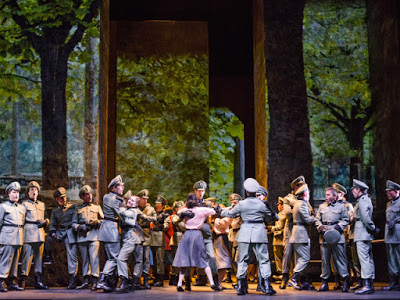 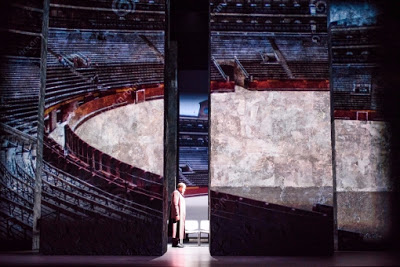 The conflict is a combination of love triangle and the persecution of Christians, the hero and heroine facing the lions in the certainty that they will be reunited in bliss. At the end of a riveting evening – the first professional performance ever in Britain – and the ancient issues strangely resonant, the denouement suddenly disappointed, reducing Christianity to the preference for blissful life beyond – not, to put it crudely, a very fashionable reduction, particularly on an evening of privileged luxury amongst the cultural, culinary and gentle bucolic delights of Glyndebourne. And, of course, one couldn’t help the troubling thought of modern-day ‘martyrs’ and the promise of heavenly bliss that leads to a very different kind of sacrifice.

And now a few relics both exotic and close to home. In our conservatory we have a number of
fairy lamps salvaged from Stoneleigh Abbey in Warwickshire. The lamps adorned
the house and grounds in celebration of Victoria and Albert’s visit in 1858.
A few years ago, clearing the way for some
repairs to the conservatory roof, I found a bird’s nest on a high ledge,
obscured by the grapevine. I was harvesting the ripe crop, and there was the
small songbird’s abandoned mud and straw home, brought inside by us as an
ornament, still with some fragments of shell from its young. Astonishing that
the tool used to construct it was the bird’s beak.
The Sedgwick Museum in Cambridge holds a
relic of a much older sometime resident of West Hampstead, a prehistoric
shark’s tooth discovered in a clay pit in the still rural village of 18th-century
West End.
Nearer to home still, I have a relic of one
of the very first residents of our house, the artist Legh Mulhall Kilpin. It is
a watercolour he painted in 1905, when he lived here and before he emigrated to Canada.

This past week, whilst de-cluttering and
preparing for my imminent departure to New York, I learnt that across the
street from the Manhattan apartment in which I’ll be staying is a relic that
predates the Stoneleigh lamps, a little pre-Civil War clapboard house described
as ‘a rare surviving remnant of the early years of the village of Yorkville … One
of the oldest of the few intact nineteenth-century wooden houses which remain
in Manhattan north of Greenwich Village.’

Postscript Since I wrote these words the peace and grandeur of the ruined amphitheatre in the desert in Palmyra have been horribly violated and I find no adequate words to express the dismay the world feels at the cycle of violence and suffering that has engulfed Syria. But in the terror of the conflict it would be heroic indeed to take comfort from the words of Victor Hugo: ‘Try as you will, you cannot annihilate that eternal relic of the human heart, love.’

One thought on “RELICS AND RELIQUARIES”