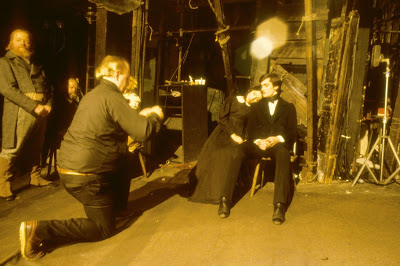 To remember happiness which cannot be restored, is pain, but of a softened kind … and memory, however sad, is the best and purest link between this world and a better. But come! I’ll tell you a story of another kind.

NICHOLAS NICKLEBY
One of the recent rediscoveries in the mammoth
ongoing task of sorting and packing was this photograph I took of Emily and
Roger Rees during the filming of Nicholas Nickleby at the Old Vic. 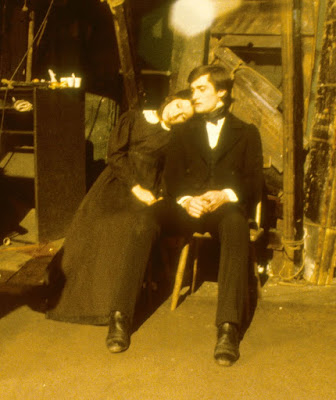 I sent the picture to Roger’s spouse, Rick
Elice, and he responded with a delightful story which I share with you here.

Roger’s coat, that he’s wearing in this
photo, he kept after you finished the New York run. He had it hanging in the
closet. One spring, there was a Broadway Cares auction and Roger decided to
donate his NN coat.

The auction was held in Shubert Alley, which
was mobbed with people. Saturday afternoon between shows, so lots of actors,
lots of fans, lots of amazing stuff being auctioned off.

Roger’s coat was shown. The bidding was
quick because someone from the back of the crowd kept upping the bid. Finally,
it sold for $4,000. Not many of the objects were going for more than $1,000, so
it was kind of a big deal.

Roger couldn’t be there at the auction; he
must have been working, I can’t remember. But he wasn’t there.

But that night, when he came home, he
received a call from the charity, telling him that the coat went for a lot of
money. He was so pleased.

‘What are you so happy about?’ he asked me,
when he saw me smiling too.

He opened the door, and there was his coat,
hanging in its usual spot. ‘I was the high bidder,’ I said.

‘This way, we can auction
it off again next year.’

Which is exactly what we did.