My purpose holds
To sail beyond the sunset, and the baths
Of all the western stars, until I die.
Tennyson, Ulysses

I can’t decide whether the Brushes app is a red herring in my career as a part-time painter or not. The iPhone ‘paintings’ I did, partly whilst travelling on the Tube to and from London Bridge and Antigone, were absorbing and made the time fly. I think my attempt on iPad to realize an illusory childhood vision of mountains, which I was disappointed to learn were ‘all clouds and sunset’ as my mother explained, is one I should make again in real paint. (N.B. As a boy soprano at Rehoboth Methodist Chapel I would sing Mendelssohn’s ‘Oh! For the wings of a dove’.) 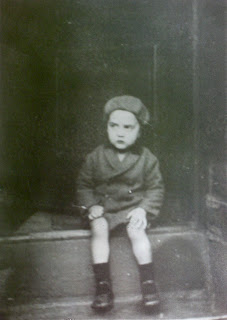 My gallery seat [in the Alhambra Theatre] afforded me the best view of Bradford, and indeed of life, I’d ever had – not counting a magnificent range of hills and mountains bathed in pink and golden light, which had revealed itself one evening a year or two earlier, down the cobbled road at the corner of our street of back-to-backs, soaring up on the other side of the railway lines and beyond Bowling Park. I fully expected to be reaching the foothills next morning and exploring the streets and lanes, where, I imagined, donkeys pulled carts up through quaint mountain villages. I was thrilled that, after all, the great and beautiful world I’d become aware of by repute had turned out to be only a tram ride away. But no; the journey was impossible, as my mother explained when I persuaded her to come out to the corner and look: ‘It’s only made of clouds and sunset, Edward.’ (From Slim Chances)

This partial preview of Sara Kestelman as Coco may seem coy, but I am saving up the whole iPad portrait to accompany a written piece. 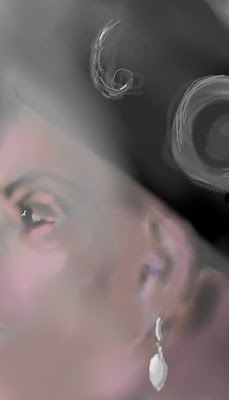 2 thoughts on “SEEKING A NEWER WORLD”