Yet there are moments when the walls of the mind grow thin; when nothing is unabsorbed, and I could fancy that we might blow so vast a bubble that the sun might set and rise in it and we might take the blue of midday and the black of midnight and be cast off and escape from here and now.


I have been searching through over fifty years of unsorted sound; my backlog of cassettes is a chaotic Tower of Babel, containing chanted lines of old parts, family recordings of Christmases past and golden summers. I even have some tape over forty years old of my elder son. There is dictation from the days before I taught myself to type, and of course the odd radio play. Actually Emily has a very thorough set of her old radio plays. I still remember her wonderful rendering of the line ‘Take me home’ at the end of Michelle Magorian’s Back Home (1995), which recently, on waking, I heard repeated on the radio and which you can hear in my homemade radio talk One’s Own Voice.

This afternoon I decided it would be a treat to hear Bernard Shaw’s play Candida, with Hannah Gordon in the title role, Christopher Guard as the young poet Marchbanks, and myself as the Reverend James Morell. The performance was first broadcast on Radio 4 in 1977 and I find it has been repeated no less than seven times in the last two years on Radio 7 and Radio 4 Extra, without my knowing! My treat was to sit with the afternoon sun pouring through the windows, Shaw’s astringent, witty and sometimes very touching dialogue pouring out of my battered old radio cassette player whilst I finished off my painting of The Allegory of Acquaintance. 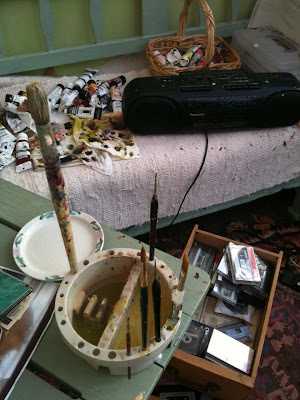 It strikes me that Candida, the ideal woman whom everybody is in love with, and Marchbanks the young poet are genuinely, refreshingly ‘new types’ and remain so. Gordon and Guard are superb. It strikes me, too, what a world of difference there is between Wilde’s Canon Chasuble (whom I’m currently rehearsing) and Shaw’s Reverend Morell, both in their own ways unique as well as being clerical clichés, both in love, both delightful to play. I am disappointed in Shaw for not appreciating The Importance of Being Earnest, but the light touch and the emotional imagination with which he creates the story of his characters in Candida is wonderfully alive. 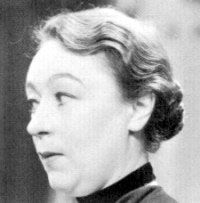 Athene Syler played Miss Proserpine ‘Prossy’ Garnett on stage in 1937, and told me in her ninety-ninth year that, in the scene where she is tipsy, having tasted champagne for the first time, Shaw wanted her to trip over the mat on her exit. ‘I refused to do it’, she said. ‘“I’ll show you what I’ll do”, I said. And I made for the door from down left to up centre in a sort of controlled curve and got a round every night!’

As I listened, and painted, I imagined … well the play of course, all oddly familiar yet coming as a series of dramatic surprises, and Shaw himself walking up the road to our local train station, which, as we know from his diary, he did at least once. And I read the other day in Trent’s Own Case, the 1936 whodunit written by E. C. Bentley not five minutes’ walk from the same station, his Police Detective Bligh describing Shaw as his favourite ‘literature of escape’ – a phrase coined by a gaolbird who recommended Shaw to the detective: 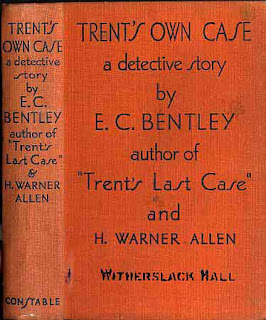 ‘I had to interrogate a prisoner some years ago about a certain matter. A confirmed criminal he was. They used to call him Pantomime Joe, on account of the cheek he used to give everybody from the dock … Joe was an educated man, and it was no surprise to me, when I visited him in his cell, to find him reading a book from the prison library. He showed it to me – Plays Pleasant, by G. B. Shaw. “What’s this?” I said. He grinned at me. “This is the literature of escape, Blighter,” he says, using a silly nickname he and his sort have always had for me. I thought that sounded a funny sort of reading to be put in the hands of a man who spent half his time in gaol, but he explained his meaning.’
‘And what can that have been?’ Trent wondered.
‘Why,’ the inspector said, ‘Joe meant, and I agree with him, that Shaw takes you right out of the beastly realities of life. I can tell you, after a hard day at our job, with all the spite, and greed, and cruelty, and filthy-mindedness that we get our noses rubbed in, it’s like coming out into the fresh country air to sit down to one of Shaw’s plays. … And there’s never a dull moment. Every dam’ character has something to say; even the stupidest ones. … Who ever had the luck to listen to anything like it in real life? I tell you, it’s a different world.’

The recommendation charmed me and I realized this afternoon how fresh an escape Shaw still is, and the characters all do have something to say and say it so well. True escapism, as I observed only last week in speaking of A. L. Kennedy’s The Blue Book, never lets you go.

And talking of prison and libraries, I’ve been re-reading Oscar Wilde’s letters to the Daily Chronicle, written after his imprisonment, with his plea that prisoners should be provided with good books: 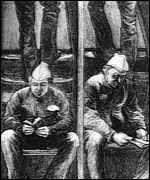 Deprived of books, of all human intercourse, isolated from every human and humanising influence, condemned to eternal silence, robbed of all intercourse with the external world, treated like an unintelligent animal, brutalised below the level of any of the brute creation, the wretched man who is confined in an English prison can hardly escape becoming insane. (23 March 1898)

The painting is an attempt at mythography, inspired by Titian, and – as in Titian’s Allegory of Prudence – there will be a Latin motto added by next week. It is a story of another West Hampstead happening: our dog effecting an introduction to one of our notable elderly characters who recounted tales to me of his young and exotic self. I had seen him about the place for twenty-eight years but never spoken to him until Bean introduced us!

Postscript
You might like to visit the newly styled homepage of Peth’s Staging Post which features a lovely new portrait of Edward by Bronwen Sharp.
KR