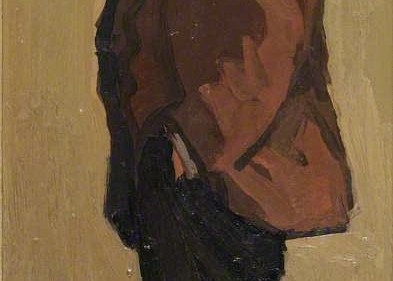 Where lemon-green the vaporous morning drips

Wet
sunlight on the powder of my eye.

A little film to celebrate the arrival of Spring and St David’s Day just past:
And speaking of St David’s Day: West
Hampstead – where all roads sooner or later seem to lead – has had over the years a number of
notable Welsh connections. I mention here just two. Sir John ‘Kyffin’ Williams,
RA (1918-2006), widely regarded as the defining artist of Wales in the 20th
century, had lodgings and a studio in West Hampstead during his tenure as
senior art master at Highgate School from 1944 to 1973.
When Williams died, the Guardian said he ‘captured the imagination of the Welsh
public. His dark, monumental landscapes of Snowdonia came to assume an iconic
status and so too did the man, affectionately known simply as Kyffin.’ He was
also an accomplished raconteur who wrote with panache about the people and
places he had known. He felt a lifelong affinity with Van Gogh, not least
because they were both epileptic.

The Welsh tenor Ben Davies (1858-1943) lived for many years at 33 Compayne Gardens, West Hampstead. He appeared with the Carl Rosa Opera Company and in 1883 created the role of Gringoire in Esmeralda by Arthur Goring Thomas (who tragically committed suicide at West Hampstead Station in 1892). He was chosen by Arthur Sullivan to create the title role of Ivanhoe in 1891. Bernard Shaw wrote: ‘As to Mr Ben Davies, the robust and eupeptic Ivanhoe, who sets to with the mailed Bois Guilbert at Templestowe in a comfortable immensikoff of the period, and gets beaten because he is obviously some three stone over his proper fighting weight, his obstreperous self-satisfaction put everybody into good humour.’

One thought on “SPRING”