So close, and yet so far out!
Dylan in The Magic Roundabout
Our (Kathleen’s and my) research rambles through West Hampstead’s past have taken a surreal turn this week, proving yet again the human spirit’s power to transcend nineteenth-century brick-built terraced conformity. The tree-lined Crediton Hill, photographed above, with its rather grand houses and its air of leisured respectability, has, in the course of the last hundred years, been a refuge and home to pioneering surrealists in virtually every medium.

Perhaps the first was the experimental poet David Gascoyne who spent the most formative moments of his childhood and adolescence at the house of his godmother Florence Mole in Crediton Hill, a house he remembered being ‘full of objets d’arts and Victorian watercolours and Meissen china’, and his window onto the cosmopolitan delights of London. Gascoyne’s first and only full-length novel, Opening Day, written at the tender age of sixteen, is a semi-autobiographical stream-of-consciousness account, after the manner of Joyce’s Ulysses, of a day in the life of a young literary aspirant. In it he recalls going to stay with his grandmother in West Hampstead (clearly modelled on Miss Mole of Crediton Hill).
At a similarly precocious age, Gascoyne published a collection of his early surrealist work and translations of French surrealists, and in June 1936, two months before I was born, he helped to organize the First International Surrealist Exhibition at the New Burlington Galleries in London.
On this occasion Salvador Dali, wanting to show that he was ‘plunging deeply into the human mind’, attempted to deliver a lecture wearing a deep-sea diving suit. After a few minutes it became clear that he was near asphyxiation and he had to be prised out of the helmet by Gascoyne with a pair of pliers.
Dali tried cocking a snoot
Adorned in a deep diving suit
Nearly drowned but not drenched
By pliers was wrenched –
And set free … was his point rather moot?

This incident may have subconsciously influenced Gascoyne’s depiction, that same year, of the classical hero Perseus, dressed in an iron lung, rescuing Andromeda from a school of seals.

In the 1970s, Crediton Hill was the home of Eric Thompson (father of actresses Emma and Sophie and husband of Phyllida Law), the inspired writer and narrator of the cult children’s television series The Magic Roundabout. The series was created in France under the title Le Manège enchanté. The BBC version, presented in five-minute episodes before the early-evening news, used the original French animation footage with entirely new scripts devised by Thompson. Its surreal style, quirky characters (including a guitar–playing rabbit named after Bob Dylan) and slightly psychedelic overtones appealed to both children and adults. 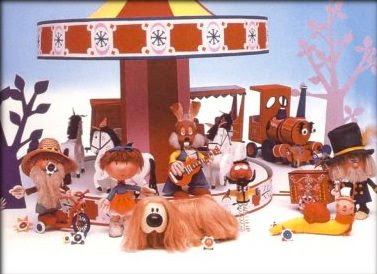 Still living in Crediton Hill, and in his ninety-fifth year, is Charles Chilton, a producer of The Goon Show, perhaps the apotheosis of British surrealism, with its outrageous, unpredictable cartoons in sound. First broadcast on the BBC Home Service over sixty years ago, the Goons have been the subject of at least two surrealistic studies, one in French (by Jacques Brunius), the other in English (by J. H. Matthews). Of Spike Milligan, the latter says: ‘His work takes on, in Breton’s enthusiastic phrase, “great hallucinatory value” in that his use of language offers us “a succession of vertiginous verbal equations” leading to solutions that evade rational limitations.’ 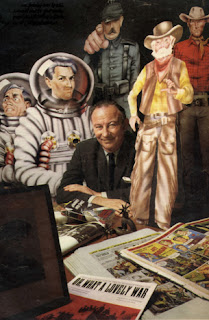 Chilton’s other forays into the surreal include the sci-fi trilogy Journey into Space, which he wrote and produced for the BBC Light Programme in the mid-1950s, and which can claim Stephen Hawking as a fan, and Oh! What a Lovely War, a show that began life as a radio play and, in its final form, told the story of the First World War as a series of end-of-the-pier sketches.
I leave you with the latest version of my ‘Allegory of Acquaintance’, a painting inspired not by Surrealism but by Titian – although Titian’s ‘Perseus and Andromeda’ in the Wallace Collection was at least partly the inspiration for Gascoyne’s surrealist interpretation of the myth, and my encounters with Captain Cox, formerly of the Bengal Lancers, may be said to have had touches of the surreal. 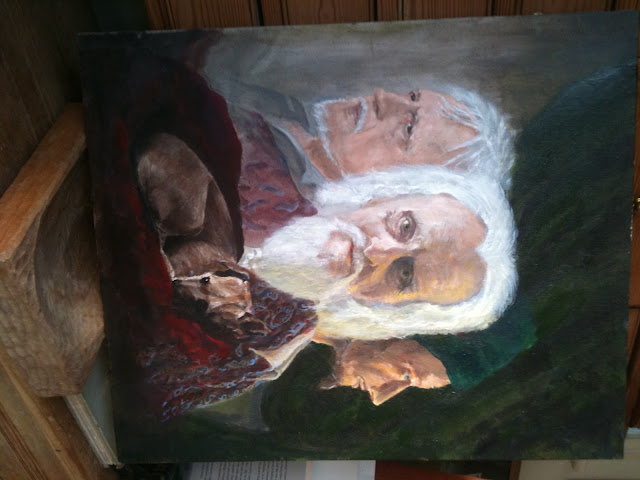