Because the sun is much too sultry
and one must avoid its ultry-violet ray.

Noël Coward,  ‘Mad Dogs and Englishmen’
Just recently, whilst working in my loft, I rediscovered two still-life drawings I did from summers past. 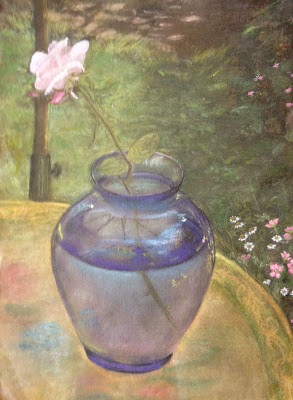 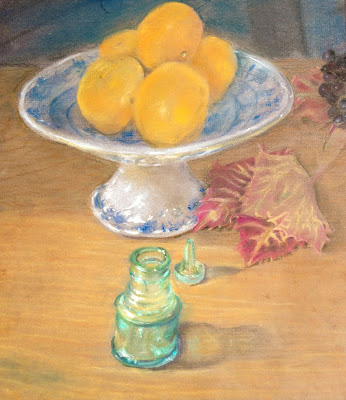 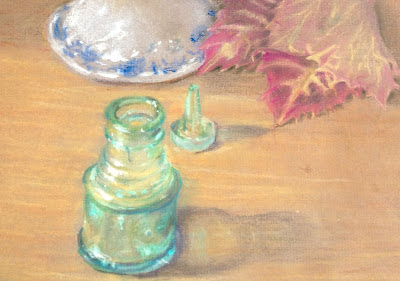 Late in the season, summer has blazed forth again. I spent a still and sultry Saturday afternoon in my hammock, under the shade of the umbrella glimpsed in the first pastel, reading Solzhenitsyn’s The First Circle. The book, which is heavily autobiographical, is set in a special prison ‘institute’ in the suburbs of Moscow at the end of 1949. The inmates are engineers and scientists who have been arrested in Stalin’s purges. Many major inventions and improvements in Soviet weaponry took place in these prison research institutes or sharashki. Here, in contrast to the ordinary concentration camps, the prisoners were adequately fed and clothed and ‘enjoyed’ better working conditions.
The title of Solzhenitsyn’s novel alludes to the first circle of Hell in Dante’s Divine Comedy, or Limbo, where the souls of the pagan philosophers and poets, and other virtuous pre-Christians, dwell in relative freedom. Unlike the other circles of Hell, this realm has verdant meadows, clear skies and clean air.
As in most things – even matters infernal – there is a West Hampstead connection. The first full English translation of The Divine Comedy was published by the Reverend Henry Francis Cary in 1814. He lies beside Samuel Johnson in Westminster Abbey’s Poets’ Corner. Johnson and Cary’s separate recuperative quests for an Elysian realm this side of eternity brought them to the green fields and healthful air of West End village, long before the coming of the railways.
Cary’s translation of Dante is said to have influenced Keats’s ‘Hyperion’, ‘La Belle Dame Sans Merci’ and, according to Leigh Hunt, ‘The Eve of St Agnes’. It also influenced Tennyson’s ‘Ulysses’ and ‘Crossing the Bar’. Keats carried Cary’s translation in his knapsack on a tour of Scotland in 1818; Ruskin is supposed to have carried it with him always; and I have occasionally carried it on the London Underground – an underworld undreamt of by Dante or Cary – as the translation is stored miraculously in my Kindle.
As I dozed in my hammock and the enveloping summer heat yesterday afternoon, just up the hill from where, 200 years ago, Leigh Hunt sought bucolic bliss in his ‘little, lull’d abode’, I echoed in spirit his prayer for the earthly comforts of Musae, libertas, otia, libri, Hortique sylvesque – Muses, freedom, rest, books, gardens and woods.